Do the Yankees really need another starter? 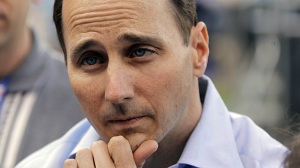 The rumors don’t stop! The Yanks have been linked to every starter thought to be on the market  ever since Cliff Lee & Andy Pettitte decided not to pitch in NY.  It seems everyone agrees the Yankees are short in the rotation, but it may surprise some that they are 3rd in the AL in team ERA (3.48). Girardi & Cashman have both said thy don’t need to make a move so the question is….Are they saying that because they have to or is the Yankee rotation really good enough as is?

To me, I am very happy with how the staff has performed as a whole but when you break it down, starter by starter, and try to figure out who you would trust in a playoff game against Boston or Texas, that’s where it comes up short. Let’s look at what we have…

IMO, CC is having that special type of season and if Cash can find a #2 starter to complement him, they could pitch the Yanks to the WS. I like Colon & Garcia but not enough to be the #2 on a WS team.

SO, what do you guys think?

Will the Yankee rotation continue to pitch like the 3rd best unit in the AL in Aug, Sept and more importantly October? Should Cashman do whatever it takes to land someone like Ubaldo, Kuroda or Wandy? Post your thoughts in the Comments section below.

Was a 4-yr Pitcher and Communications Major at Seton Hall University in the 90s. His knowledge & opinion of the game comes from his background as a player and ardent lifetime Yankee fan. However, Fishjam also incorporates sabermetrics and statistical support to form a well-rounded view of the game.
View all posts by fishjam25 »