Texas hopes to be doing this after the game tonight.

Texas can win it all tonight and the Cardinals look to force a Game 7.   Talk about whatever you want in the comment section either about this game or anything else. Enjoy.

Rafael Soriano’s agent Scott Boras told George A. King III of the New York Post that his client will not opt out of his contract with the Yankees.

“He adjusted to the [seventh- eighth-inning] role, liked being there with Mariano [Rivera] and he adjusted to New York City,” said Boras. “The player is happy there.” That may be true, but his decision likely has a lot more to do with the fact that he is coming off a down season and wouldn’t come close to an $11 million salary in a crowded market for closers. He’ll have the option to opt out of his contract again following the 2012 season, but with $14 million coming his way in 2013, it would shocking if he actually did so.

According to Wallace Matthews of ESPN New York, the Yankees are considering a pursuit of Carlos Beltran this winter.

“He’s on our list,” a team official told Matthews. “But we have to make a decision on Swisher first.” Most expect the Yankees will exercise Swisher’s $10.25 million option for 2012, but Beltran could be an alternative in right field if they decline. It’s also possible that the Bombers could pick up Swisher’s option and dangle him in the trade market.

You Be The Yankees GM: Who Would Stay & Who Would Go? (Yankees Outfield)

Welcome to Part 2 of this 4 part “Interactive” article where we ask what YOU would do as the Yankees GM. In the last article you voted if you were Yankees general manager whether Derek Jeter, Mark Teixeira, Robinson Cano, Russell Martin & Alex Rodriguezwould come back. Now we take you to the depths outside the infield and into the outfield where 3 contenders are hoping that you 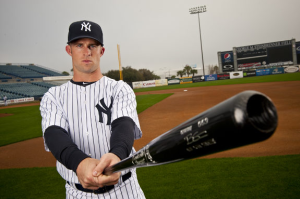 will choose them to return to the team in 2012. So, here we go again. What would you do if you were the Yankees GM?

If you expected a .333 AVG, 20 HR, 100 SB season from Brett Gardner then you were miserably disappointed. Then again you were disappointed because your expectations were too high. Although Gardner’s average and OBP were lower than in 2010, Gardner had a good season overall if you take out the dismal 1st month of the season. Gardner was 1st in the AL in SB, has a career high 7 HR’s in a season and was one of, if not the best defensive outfielders out there. He was also one of the very few that contributed during the 2011 postseason run that ended in an ALDS defeat. So what would you do if you were the Yankees GM? 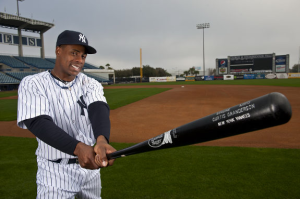 Curtis Granderson had a year that any Yankees player could dream about. Having more than 30 HR and over 100 RBI’s in 2011 must have made Granderson’s year, and the All-Star team. While Granderson had an escalator year average wise, the power numbers were there and is a serious MVP contender for the 2011 season. Now, you have the choice whether to keep him, or trade him off. What would you do if you were the Yankees GM?

Now, you look at Nick Swisher’s numbers for the 2011 year and you wonder, “Why do so many people want Swisher out?” The truth is that Yankees fans are satisfied with Swisher’s season numbers; it’s the postseason numbers that are abysmal. Swisher has not hit in the playoffs for the past 2 straight years and it is beginning to irk many Yankees fans. Some Yankees fans are wishing that the Yankees could eat Swisher’s option and send him on his way. But remember, you are the Yankees general manager. Take everything that Swisher has done into consideration. What would you do if you were the Yankees GM?

I know Andruw Jones isn’t a regular Yankee, but if I don’t mention him then it will be as if he never existed. I felt that Girardi had platooned Gardner with Jones A LOT during the beginning of the season but as Gardner got hotter and hotter, Jones was used less and less. We admit that Jones isn’t as fast, or as athletic or as graceful as he used to be but he was a pretty okay backup outfielder. And those 13 HR’s when you only play part time isn’t half bad. So, now it’s time for you to decide. What would you do if you were the Yankees GM?

Cano’s contract includes a $14 million club option for 2012 and a $15 million club option for 2013. These terms are a bargain given his outstanding production, so the Yankees have no sense of urgency to negotiate a new contract. For what it’s worth, Boras was hired by Cano earlier this year, so he won’t receive any commission until the 29-year-old second baseman signs his next big deal. Can’t blame the guy for trying.

Anthony McCarron of the New York Daily News reports that negotiations between the Yankees and general manager Brian Cashman are “just about” complete.

Not a surprise, as most expected negotiations to go smoothly. Cashman’s new deal is believed to be for about three years. It will be done by October 31, but could be announced once the World Series is over this week.

Yanks “close to completing” a new offer for C.C. Sabathia

Yanks “close to completing” a new offer for C.C. Sabathia

According to David Wallstein, the Yankees are very close to finishing a new contract proposal for C.C. Sabathia. The contents of this contract are unknown, except that it would “sweeten” the deal he already has left. The intention is to extend Sabathia before the he opts out, which can occur up to 3 days after the end of the World Series.

Well the world series was delayed as you all know by now.  Tonight will be game 6.

— Yesterday the Yankees met in Tampa to talk, mainly about Sabathia.

— Yankees banking on C.C. but could be wary of Wilson.