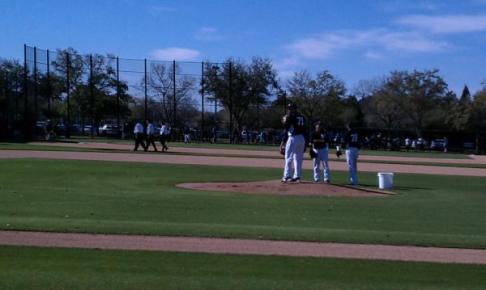 Today was the day that the Yankees Pitchers and Catchers started their workouts! Here were some of the highlights of today’s Spring Training.

— Mariano Rivera arrived to Spring Training after telling Cashman he was going to be late. Mariano, you weren’t late. You can come whenever you want. You’re Mariano after all.

— The Yankees and Raul Ibanez had agreed on a 1 year, $1.1 Million deal pending a physical.

— The chances that Eric Chavez returns to the Yankees are “50-50” according to Jesse Sanchez of MLB.com. Chavez says that he will also speak with his agent about the matter.

— Joe Girardi spoke to the media for the first time this season and he mainly focused on the rotation and on former Yankee pitcher A.J Burnett.

— Michael Pineda was working on his slider with Russell Martin earlier this morning which slightly surprised Girardi since it was still very early. However after nailing the pitch, Martin pumped his fist towards Pineda with praise.

— Mariano Rivera says he already knows if he is going to retire after this season. “I know now, but I don’t have to tell you.” Thanks Mo. That really answers our question.