Most of the debates that take place before a new season regarding the New York Yankees are as predictable as pitchers and catchers arriving in late February.  I’ve come to expect most of these debates and just assume that the rotation, batting order, and relief pitching roles will be scrutinized until the very first lineup card is made on opening day.

Debates are really what this time of the year is all about. They’re a way to pass the time and expel the nervous energy that many baseball fans feel as a new season approaches. As fans or media, that is what we do. We debate and postulate endless theories and possibilities of the season to come. It’s not often I’m caught off guard by a possible topic of debate, so when more than one Yankee fan asked me who I thought should be the cleanup hitter in 2012 I have to admit I was surprised.

It’s my opinion that Yankee fans are as well-educated and informed about their team as any fans in existence. They’ve always had every Yankee game available on cable TV and a treasure trove of solid media covering the Yankees on radio,  in print, and now more than ever on the internet.  You can wander into Twitter at any time of the day on any day of the year and find thousands of Yankee related tweets just waiting to be read.  The upside of this never-ending barrage of Yankee conversation and coverage is the awareness that Yankee fans have about their team.  One of the downsides is that the intensity with which the Yankees are covered can make a sub par season seem far more dramatic than it actually is. 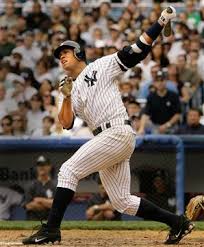 No Yankee in my lifetime has been the lightning rod of controversy that A-Rod has been.  From his admitted PED use to his postseason failures to his high-profile women to his massive contract there has never been a shortage of controversy surrounding him.  Through it all, the one constant associated with A-Rod has been his regular season performance as the Yankee cleanup hitter. I see no reason why removing A-Rod from that role should even be considered and think the naysayers are really jumping the gun on A-Rod’s “demise”.

Yes, I know, when we last saw A-Rod  he we was futilely flailing at pitches with a heavily taped thumb in the ALDS. It was another ugly chapter in the postseason history of A-Rod as a Yankee. His postseason failures dating from the 2004 ALCS all the way through the 2007 ALDS made him the target of very well deserved criticism that defined his Yankee career until 2009. There never has been nor will be a good excuse for A-Rod’s performance in those four consecutive postseason series and to his credit he never offered any.

His redemption in the 2009 postseason seemed  to have given him a clean start with his teammates, management, and Yankee fans. Forgiveness for what he had done in the postseason from 2004-2007 wasn’t ever going to be offered, but he seemed to be back to square one, which was a lot better place than he had been in. A-Rod had solidified himself in Yankee history by coming through when it mattered and it appeared life would be easier for him in New York.

A-Rod’s offseason hip surgery delayed his debut in 2010. Admittedly  rushing his return back to the team before he was fully ready to play, he experienced a drop in BA/OBP (.270/.341) but still hit 30 home runs and drove in 125 runs. Not a bad year for a guy who was getting surgery when everyone else was taking spring training batting practice.  A decent playoff series against the Twins followed the 2010 regular season but an awful ALCS showing against the Rangers incited the cries of “same old A-Rod”.   His 2010 season may have started and ended on low notes, but the stuff in between was pretty good. 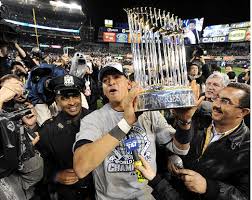 A-Rod showed up to camp in 2011 looking better than he had in years. His sculpted physique still looked like that of the tremendous athlete he’d always been. His tape measure shots in spring training games and comments about his state of mind and health raised the bar on his expectations for 2011 even higher. A-Rod began 2011 in fine form. His average and OBP rose back to expected levels. He looked to be on his way to another great regular season before a passed ball was to change his fate. On June 19th in an interleague game against the Cubs, A-Rod broke for home from third base on a passed ball and then changed his mind and went back. It would have been much better for A-Rod and the Yankees if he had just kept going to home and made an out. In the process of pulling up and heading back to third base A-Rod suffered the first of two injuries that would turn his 2011 season into a nightmare.

On the day A-Rod hurt his knee  in Chicago he had gone 3-4, raising his average to .289, and drove in his 43rd run of the year. He had 13 home runs at that point and his OBP was .372.  He continued to play through July 7th, still hitting but totally absent of power, riding an 0-85 streak of homerless at bats. Arod’s stats at the time he elected to undergo surgery were .295/.366,  13 HR, and 52 RBI.  Even with his injured knee compromising him from June 20th-July 7th A-Rod was more than holding up his end of the deal as the Yankee cleanup hitter.

After knee surgery deemed successful, A-Rod rejoined the lineup on August 21st against the Twins.  The excitement of A-Rod’s return was short-lived, as he suffered a badly jammed left thumb trying to make a backhanded play on a Joe Mauer ground ball in his very first game back from the knee injury.

It was all downhill for A-Rod from there. Trying to play through a great deal of pain was bad. Even worse? Hitting coach Kevin Long improvised a split grip on the bat for A-Rod to use, with his hands separated by a half-inch of adhesive tape on the handle to ease the pressure on his injured thumb.  It just didn’t work and it wasn’t realistic for anyone to think that it would. To expect a 36-year-old veteran to succeed with an unorthodox grip and great pain is unrealistic.  A-Rod is an all-time great but he’s not superhuman. He failed to regain his rhythm and was totally lacking confidence at the plate. He looked like a shell of himself in the 2011 ALDS.   The last image left of his season was a strikeout to end game 5 and send the Yankees home.  As he walked away from home plate with his head down he looked like an injured, dejected player, which was exactly what he was.

So did 2011 mark the end of A-Rod? Of course not. Its one thing to view an aging star with apprehension after a bad season. It’s another thing to take one very unlucky season with legitimate injury excuses and declare  the end for one of the best athletes to ever play the game.

In the offseason A-Rod visited Germany upon the advice of NBA star Kobe Bryant to have Orthokine therapy performed on his knee and shoulder.  Orthokine therapy involves a healing activator used in blood-spinning treatments.  The effect this treatment will have on A-Rod are yet to be seen but it must be viewed as positive that A-Rod took an aggressive step to be as good as he could be physically for the 2012 season.

It’s always been my rule of thumb never to declare any star athlete finished off of one sub par season. This is especially valid when that sub par season had legitimate injury excuses.

It’s way too early to declare A-Rod finished or done. For all of his postseason disappointments, A-Rod has been an anchor as the Yankee cleanup hitter since his arrival in 2004.  There is absolutely no reason to believe that a healthy A-Rod won’t perform up to the level he was performing  before his injuries last year.  He’s one of the best cleanup men in Yankee and MLB history and any talk of moving him out of that role is as premature as it is irresponsible.  You have to ask yourself if people would be in a such a hurry to declare him done if he was a warm and fuzzy kind of guy or if his legacy of postseason failures wasn’t so extreme.   New York is a town that honors its postseason heroes forever.  The names Dent, Tyree, and Matteau are as pleasantly spoken as Ruth, Manning, and Messier. New York is hard on its postseason failures.

It sometimes sounds like people want him to be done, out of anger and disappointment for his off the field behavior and failure to come through in big moments.   People wishing that does not make it so.  His detractors will get their wish one of these years, but it’s not going to be this year. I expect Joe Girardi to write the name Alex Rodriguez in the cleanup spot on opening day against the Rays and that’s exactly where he belongs until he proves otherwise.  There is still enough time in A-Rod’s career to rewrite his legacy, but he needs to start rewriting it this year.