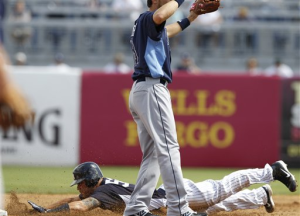 Good evening everyone! Yankees finally broke their 4 game losing streak and they are now 3-4 in Spring Training. Let’s get to the notes:

— The biggest relief of the day was getting news on David Robertson for Joe Girardi. “It was a huge relief. I was worried when they said there was a cause for concern, but obviously this is good news. Hopefully he’ll be walking around here pretty good by sometime next week and we’ll be able to get him back to playing catch and doing all that stuff.”

— Russell Martin had stolen his third base of the Spring and is the SB leader in the Spring (Gardner, Granderson we gotta step up our SB game here fellas).

— Girardi also commented on Freddy Garcia’s start. “There’s stages in your career: Proving you can play, then just getting ready, then again proving that you can still play. I think, for Freddy, he’s in a competition. I believe Freddy can still pitch, though. I do. The best thing for me is to have a tough, tough decision come April 6.”

— David Robertson shouldn’t feel too bad about getting injured outside of the clubhouse. Freddy Garcia did it last year when he sliced himself with a kitchen knife. But one guy that will never let D-Rob forget it: Mariano Rivera.

— Brett Gardner, Mark Teixeira & Alex Rodriguez will pave the way to the Magical World of Disney Park (No, you won’t find Walt Disney there) along with the rest of the Yankees to take on the Atlanta Braves, the full squad this time!

Girardi said Robertsons diagnosis is “a huge relief.” Said he “would think” Robertson would be ready for season opener.

Early guess is Robertson misses two weeks. Should be plenty of time to be ready for Opening Day.

Have a good night everyone!