Garcia pitches well, then leaves due to injury in Yankees 7-5 loss to Blue Jays

Freddy Garcia made his case as to why he should be in the starting rotation during a Yankees 7-5 loss to the Toronto Blue Jays. Garcia pitched 3 innings of 1 run ball until he was forced to come out of the game in the 4th after he misplayed the baseball and it hit him in the right hand. Garcia had his fingers stretched out and refused to move his hand as Girardi took him out of the game.

Cory Wade gave up a solo HR to J.P Arencibia while Manny Banuelos was lit up, giving up a 3 run HR to Edwin Encarnacion. Encarnacion also hit a solo shot against Garcia in the second inning. Garcia was taken back to Tampa where he will have precautionary x-rays.

WHAT’S NEXT: Brett Gardner, Russell Martin & Andruw Jones will make the trip to play the Washington Nationals tomorrow. Fans who are interested in watching Nationals prospect Bryce Harper (along with the Yankees of course), the game is on MLB Network tomorrow at 1:05pm. Michael Pineda is slated to pitch for the Yanks.

— Only 3 regulars will make the trip tomorrow to Viera for the Nationals game: Brett Gardner, Andruw Jones & Russell Martin. MLB advises that each team brings at least 4 regulars on road trips. Here is everyone who makes the trip:

— David Robertson reveals that his foot feels MUCH better but they are not going to rush him back yet. He’ll increase in exercise as time goes on.

— Joe Girardi said yesterday that Mariano Rivera will make the trip to Miami when they play the Marlins. The fact that they are flying there seemed pretty tempting. Also Girardi plans on starting to make cuts to the team this weekend, sending some players down.

It is now estimated that women make up forty-six percent of baseball’s fan base and that percentage is growing every day. That’s the largest percentage of women in a major sport’s fan base in the United States. That number is up from thirty-seven percent of women who were included in baseball’s fan base just ten years ago.   When I first joined Twitter, one of the things that soon became clear to me were the incredible number of female Yankee fans.  These aren’t women who just cheer for the cute players. They’re intense, they’re passionate, they watch every game, and they know what they’re talking about. Suzyn Waldman sure isn’t the only woman screaming every time the Yankees play.

The trend of increased participation in baseball’s fan base was further exemplified just a few days ago when MLB announced that two women had been chosen to participate in the “Fan Cave” promotion.   http://espn.go.com/espnw/more-sports/7652717/nine-female-contestants-vying-part-mlb-fan-cave

In January, the Yankees held their second annual women’s fantasy camp in Tampa Bay. Ninety-one women paid close to two thousand dollars to live a three-day dream of playing baseball while being instructed by such former Yankee stars as Tino Martinez and Darryl Strawberry.  http://newyork.yankees.mlb.com/nyy/fan_forum/fantasycamp_women.jsp

I’m not sure why baseball has more appeal to women than the other major sports in this country. Whether it’s the lack of violence or the intellectual nature of the game, women have embraced baseball in larger numbers than ever before.  As baseball has slipped further behind the NFL in the television ratings, hope is not lost that baseball can rally and can close the gap.  If baseball does close the gap in the ratings, the rapidly growing number of women in baseball’s fan base will lead the way.  While many people have found the increased interest in baseball by women surprising, I’m not surprised at all.  I had the privilege of knowing one of the greatest Yankee fans of all time, and she was a woman.

In my last article about spring training, I spoke of the education about baseball that my grandfather William Shepardson had given me in my first twelve years on this planet.  At 1:15 A.M. on this past Saturday morning, his wife Adele Shepardson, went to join him.

My grandmother was many things while she was here.  She was a daughter, a sister, a wife, a mother, a grandmother, and a great-grandmother.  In addition to helping my grandfather operate his business, she was also a business owner of her own before it was common for women to own businesses.  She was the first person to take me to the Baseball Hall Of Fame in Cooperstown.  When I was eight years old, my idol was Thurman Munson.  I was about to enter the first rung of little league baseball and hatched a plan.  I surmised that if I showed up for the first practice with a catcher’s mitt that I would get to play the position.  My grandmother bought me a catcher’s mitt, and I got to play the position.

When my grandmother was a very little girl, her father left her family in an age when that sort of thing was considered scandalous and stigmatizing. With her two sisters and mother, she moved in with her grandparents. In a household dominated by women, what she knew about sports could probably have been written on the back of a postage stamp with some room left over.  That would change when she met and married the oldest of seven boys in a family where sports dominated life itself.  In the family she married into, if the boys weren’t playing sports they were talking about them, listening to them, or watching them. It was a Yankee family through and through. When my grandparents became one of the first families in town to own a television, dozens of men would come over to watch the Yankees every time they were broadcast.  My grandmother had two choices.  Since she sure wasn’t going to beat them, she joined them. In an era where far fewer women were baseball fans than in today’s age, she began a romance with the New York Yankees that lasted the rest of her life.  She was ahead of her time.

The fondest baseball memory I have with my grandmother occurred on October 2nd, 1978.  After a wild summer where the Yankees looked hopelessly beaten in the AL East, they had rallied from 14 1/2 games out of first place to take the lead in the AL East in September.  The Red Sox refused to go quietly though, and rallied back to finish in a tie with the Yankees and force a one game playoff.  At the age of nine, I sat in the front parlor of my grandparents home with my grandfather and we agonized over every pitch.  My grandmother was too nervous to sit still, and would walk in and out of the room.

Trailing by two runs in the seventh inning, my grandfather and I let out a collective groan when Jim Spencer flied out with Chris Chambliss on second base and Roy White on first.  There were now two outs and coming to the plate was the light hitting Bucky Dent.  Bucky Dent just happened to be my grandmother’s favorite player on that Yankee team.  So when I said to my grandfather “Oh no, we have no chance now, Bucky Dent is up” and he made a sour face my grandmother scolded us both.  She  said “You’ll see!! my Bucky will do it!”   As the famous home run cleared the Green Monster, my grandmother erupted.  She danced around the room, screaming over and over again “He did it!!” as my grandfather and I smiled sheepishly at each other and at her.  She took me out to dinner after the game.  As I sat across from her eating pizza, she proudly declared to the other Yankee fans who stopped by the table to say hello that HER Bucky had won the game. 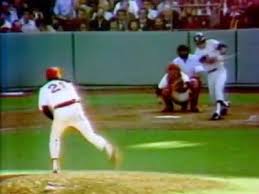 The joy that the Yankees brought my grandmother was immeasurable.  Even in the dark times that followed that 1978 World Series win, she’d watch every game, often keeping score.  In 1995 she saw a young shortstop play a few games with the Yankees. She declared he was going to be her new favorite player and would lead the Yankees back to the top some day.  His name was Derek Jeter, and the next year she proudly proclaimed that the player she had declared as “hers” had done just what she said he’d do.  She enjoyed those dynasty years with great pride and enthusiasm.  She was heartbroken when Joe Torre left, and she exulted when the Yankees would win it all again in 2009.

For over sixty years my grandmother knew the greatest joy of all, and that was being a Yankee fan. She wouldn’t have traded it for anything.  I don’t know exactly how many games she watched in her lifetime but I can estimate that my grandmother viewed over five thousand Yankee games after my grandfather left her.  The quality of her life wouldn’t have been the same without her love of baseball and the Yankees.

So this year,  everyone should make it a point to try to introduce at least one woman to baseball.  You might be giving someone a gift that will last them a lifetime.

Good Morning.  Yankee pitchers were all sharp last night in 1-0 loss to Boston.

* Nice piece about Brett Gardner on MLB.com on how he needs to be more consistent. Yanks want him to bring the aggressiveness he shows on defense to the plate and the basepaths. KLong feels he coud hit  around .300 with 75-80 SBs.

* Nunez was late scratch to due hand discomfort in batting practice