PTF Romine (DL) Notes:  Only 4 hits. Two of which came from Laird.  Wise had a three run homer.

PTF Zolio Almonte – Did not start but did make it into the game where he has 1 hit in 1 AB and also scored a run.  Notes: Mustelier had 2 hits one of which was a homerun.

PTF J.R. Murphy (DNP) Notes: Segedin had the game winning homerun in the top of the 12th. He also had a double.  Flores had an outfield assist.

Pitching
PTF Nik Turley – Pitched tonight stats below.  Only one earned run not to shabby.

— Andy Pettitte will start again in Tampa on Sunday and will throw roughly 45 pitches in this outing.

— Happy Birthday to Yankees 1st baseman, Mark Teixeira! My wish for you…is to get 3 hits in tonight’s game, heck I’ll throw in a HR.

— Just a reminder, I am hosting a live chat tomorrow at 7pm on the site. Come with your questions and comments about the Yankees and I’ll be sure to answer them.

— Also if you haven’t heard, Jorge Posada is coming back to the Yankees…for one night. He’s not playing, but he’s going to throw out the ceremonial first pitch.

— Yankees are off tomorrow but they come home and will have their annual Homecoming Dinner where Jorge Posada will be honored with the “Pride of the Yankees Award.”

UPDATE, 7:11pm: The Yankees are in a rain delay. The tarp is on the field.

Jorge Posada is coming back to the Bronx…if only for an evening. Jorge Posada is slated to throw out the first pitch on Friday evening to commence Opening Day for the Yankees. Posada is also being honored with the “Pride of the Yankees Award” at Thursday’s homecoming dinner.

After Posada throws the first pitch, one of the stars of the Broadway musical Newsies named Jeremy Jordan will sing the national anthem, followed by a Navy F-18 ceremonial fighter over the stadium. “God Bless America” will be sung by Paul Nolan of the Broadway show Jesus Christ Superstar. 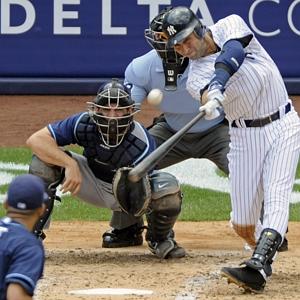 After a season opening sweep at the hand of the Tampa Bay Rays the Yankees and their fans were a little on edge. Some were panicking while others preached patience, but you would be lying if you were not getting a little antsy while waiting for their first win of the season. Joe Girardi kept preaching no panic but the expectations and the Yankees payroll can make that difficult.  Who else would you expect to set the tone to turn around the turmoil other than Derek Jeter?

Jeter led off Monday’s game in Baltimore with a single and ended up scoring on a Mark Teixeira RBI single to give the Yankees an early lead. With a 3 game losing streak it is very important to get out ahead early so thoughts of the losses do not creep into your mind.  There was no classic Jeter moment on Monday like his flip throw vs. Oakland, his leadoff homerun vs. Bobby Jones in the Subway Series, his diving catch in the stands against Boston his Mr. November homerun, or his 3,000 hit last year, but just a classic Jeter workman like performance. Jeter went 4-4 Monday in leading the Yankees to their first win of the season. He wasn’t done on Tuesday. He led off the game with a homerun that helped set the tone for the 2nd win of the season for the Yankees. Jeter’s attitude of never letting the previous bad game effect the next is something that has helped the Yankees the last 16 years and will continue to as Jeter enters his 17th season.

About one year ago at this time Jeter was under heavy scrutiny when it looked like his days as a productive player may be numbered.  Jeter was coming off a career worst season in 2010 when he only hit .270, with 10 HR’s, 67 RBI, and a .710 OPS. His defensive range was also coming under constant criticism. This led to a tense negotiation with the Yankees that got somewhat ugly, but Jeter signed  for what could be for 4 years and 56 million dollars. Jeter did nothing to silence those critics in the first 3 months of the season as his batting average stood at .254 at the end of the June. However, Jeter finished the season on a tear and ended up batting .297 and has carried it over to this season. He looks very spry in the field and even saved a run with a diving play to his left on a Chris Davis grounder last night. 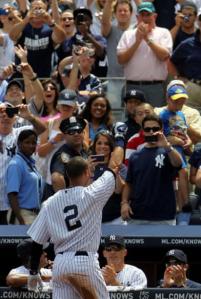 Whether Jeter is struggling or surging his leadership, professionalism, and confidence will always help the Yankees when they are desperate for a win. I do not believe that chemistry is important in baseball like it is in basketball and football because baseball is too much of an individual sport. The 1978 Yankees are an example of not needing to like each other to win. But if you think Jeter’s intangibles have no impact then you have not been paying close enough attention for the last 16 years. You can see some of Jeter’s toughness rub off on Ivan Nova as he got out of jam after jam to keep the Yankees ahead.  The Yankees are out from under their 0-3 start in large part due to Jeter’s efforts and the rest of the team needs to continue to follow his lead.

Good morning all.  Yankees needed extra innings last night but getting a win is what matters.   Same time again tonight.  Let’s get right to the links….

— Mark Feinsand reports C.C. Sabathia is ready to put his last start in the past with today’s performance.

— Bryan Hoch reports Soriano was out of yesterday’s game because of a split nail.

— Recap of the 7-1 Loss for the Trenton Thunder last night.

In a 4 hour and 38 minute game, it seemed that the Yankees (2-3) were hopeless early on. Freddy Garcia pitched atrociously in his first start of the season, throwing 5 wild pitches which gave the Orioles (3-2) 3 of the 4 runs. The Yankees were 4-1 going into the 6th inning until a small rally got the Yankees 3 runs to tie the game at 4, and the game stayed that way for 6 innings when the Yankees scored the game winning run courtesy of Raul Ibanez.

GARCIA HAD AN ‘OH NO’: In his first start of the season, Freddy Garcia did not pitch well at all. He had no control, he got behind hitters and he threw too many wild pitches. Girardi eventually lifted Garcia in the 5th inning, which allowed the Yankees to start their rally to an eventual victory.

PHELPS HAS DAZZLING APPEARANCE: David Phelps came out of the bullpen today and pitched 2.1 innings, retiring all seven men that he faced; four of them on strike outs. If Phelps is trying to keep his spot on the team, then by golly it’s working.

AN ‘EL CAPITAN’ MONSTER SHOT: The first inning didn’t go the way Derek Jeter planned it; it was better. He sent a monster shot to center field which made the game 1-0 at the time. Jeter was 2 for 6 in the 12 inning game.

GARDNER HITS vs. LHP: If I’m Brett Gardner, I would be feeling pretty good right now. Gardner had 2 hits off of a left handed pitcher and set himself up for good  night at the plate. Gardy was 2 for 4 with an RBI, his second of the season. Joe might want to pencil him in more often.

IBANEZ DELIVERS: Raul Ibanez was regularly not in the lineup tonight, but it was a good thing Girardi put him in or else the Yankees probably wouldn’t have won without him. Ibanez had a double in the 12th inning which plated Robinson Cano for the go ahead run. Ibanez isn’t looking like that player that he was in Spring Training. He seems to be a dominant force all on his own.

WHAT’S NEXT: Yankees will try for the series sweep tomorrow as CC Sabathia will take the mound. The game will be on YES Network at 7:05pm. Let’s hope that this time, his outing is much more dominant. Yankees could use it.