Is A-Rod’s Contract The Worst in MLB History? 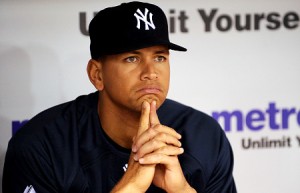 Let’s go back in time, shall we? It’s the day of Game 4 of the 2007 World Series. While the Red Sox closed in on their 2nd title in four years, the lights at Yankee Stadium had went out weeks before. Another disappointing, first-round exit by Joe Torre’s Yankees had led to Joe himself leaving, and the Yanks knew what was about to happen.

I remember it well too. That morning I turned on ESPN to find out Alex Rodriguez had opted out of his 10-year, $252 million deal, first signed with the Texas Rangers in 2001. My jaw dropped. The clear-cut favorite for the 2007 AL MVP, A-Rod was a free agent again.

We all know what eventually happened. Despite The Boss’ warnings that they wouldn’t bring A-Rod back if he opted out, by December 13th, Alex was back with the team he never left. 10-years, $275 million. Tons of endorsements. Many, many incentives that included breaking the all-time home run record. The biggest contract in sports history, for arguably the biggest sports figure in the world.

Now, fast forward to present day. A-Rod is 36, turning 37 this coming July. He hasn’t played in 150 games nor hit more than 35 home runs in a season since the year before his big deal – 2007. A former steroid-enhanced Iron Horse, A-Rod has missed 138 total games over the past four seasons, spending a few 15-day stints on the DL and having surgery on his hip, meniscus, and shoulder. His absence, though not detrimental to the Yankees, has been glaring every time, and in the 99 games he played in 2011, it seemed like he wasn’t even there, hitting just 16 home runs.

This isn’t the fairy-tale story most Yankee fans hoped for, huh? So, the question has to come to every fan’s mind – is Alex Rodriguez’s contract….the worst in MLB history? As it stands today, probably.

Already a shell of his former self, A-Rod still has six years and about $140 million left on his contract. That in itself is a ton of money, but for the lackluster end to a Hall-of-Fame caliber career? It’s atrocious. Fielder is 27, hits for average, has a ton of power, and drives in a lot of runs. All of which A-Rod probably won’t do for the next 6 years.

Granted, A-Rod did only play in 99 games, but averaging his numbers out to what a full season would have produced – somewhere near 25 home runs and 85 RBIs. That’s tremendous for a 36-year old, but not for someone making $31 million, which was A-Rod’s salary in 2011. And the way he’s started out 2012, after yet another fantastic spring where he looked in shape and primed for an “MVP season”…it’s almost sad to watch.

If A-Rod stays healthy, he could conceivably hit 20-25 homers a couple more times, probably this year with his power stroke apparently back. He did crush it over the Green Monster yesterday. But again, that’s not worth the money he’s being paid. And what happens after that? We’re talking about 39, 40, 41, and 42 year old A-Rod STILL on the team and making 20+ million dollars. Talk about an ugly situation.

This biggest reason why this is the worst deal in history – not even A-Rod himself. But the actual contract. We’ve considered deals horrible in the past, like Carl Pavano, Kei Igawa, A.J. Burnett of late, but they never affected the team greatly as far as the entire payroll. The Yankees had Pavano, sure, but it didn’t stop them from signing free agents or trading for players with big contracts (Randy Johnson, Johnny Damon, etc.).

A-Rod’s deal is literally limiting the Yankees and how much they can spend. We’ve seen it this past offseason. Beuhrle, Wilson, Darvish – all gone without the Yanks even taking a flyer. The Yankees do not want to pay the high luxury tax anymore, and want to lower the payroll down to $189 million by 2014, and they could have done that by now had A-Rod not had re-upped with the Bombers.

We will see over the next few years, the Yankees will not make legitimate offers, if any, to big-time free agents. We will see stop-gap type guys like the Freddy Garcias and Bartolo Colons of the world. And we will witness something no one ever has before – the Yankees not being able to spend money.

And ultimately, it all draws back to one man, and one contract – Alex Rodriguez. For 10 years, $275 million, and a heap of disappointment.

Good morning and a happy Saturday morning to all! Freddy Garcia gets the starts vs. the Boston Red Sox today. Here are your morning links!

— With Brett Gardner on the DL, Joe Girardi is planning on doing a new platoon in the meantime–who platoons in LF whether vs. right handers or left handers.

The day was supposed to be all about the Red Sox. It was the 100th anniversary of when Fenway Park opened, the Red Sox had every player that was still alive come to the ballpark (except for a select few) and they wore throw back jerseys along with their rivals, the Yankees. There was just one problem; the Yankees diverted the attention from the Red Sox, to them. The Yanks hit 5 HR’s and Nova pitched 6 brilliant innings as the Yankees went on to defeat the Red Sox 6-2 in the first game of a 3 game set.

NOVA DAZZLES: Ivan Nova pitched 6 innings of 2 run ball (although one of the runs shouldn’t have scored) and looked very poised on the mound. Since Nova came back to the Majors last year, he has won every decision and doesn’t look like he plans on stopping. It seems that Nova is going nowhere when it comes time to make the decision about the rotation. It might also possibly be that Nova will head to the #2 spot after pitching like a true #2 starter.

YANKEES CRANK 5 HR’S: The day after Curtis Granderson hit 3 HR’s in a game, some other Yankees were inspired so they hit HR’s themselves. Eric Chavez led the Yankees with 2 HR’s in the game, coming in back to back appearances. Russell Martin, Alex Rodriguez & Nick Swisher all added to the fun. It was Martin’s first of the year, A-Rod’s 2nd of the year, Swisher’s 3rd of the year and Chavez’s 1st & 2nd HR’s of the year.

GIRARDI MAKES HEAD SCRATCHING MOVES: The Yankees had a 4 run lead, so there was really no need to bring in David Robertson & Mariano Rivera. Cory Wade seemed to have been doing very well on his own. Robertson had a scoreless inning although he gave up a single and Mariano pitched the 9th, but not before Cody Eppley came in the game to start the 9th inning. He gave up a base hit to Jarrod Saltalamacchia before being lifted by Girardi. For those of you who don’t know who Eppley is, he was claimed on waivers from the Texas Rangers and was placed on the roster after Brett Gardner was moved to the 15-day DL. The only player on the current Yankees team that Eppley knows–Clay Rapada.

WHAT’S NEXT: Yankees and Red Sox will continue with Game 2 of the 3 game set tomorrow afternoon. Freddy Garcia is slated to take the mound for the Yankees (meaning the Yankees might want to make sure that David Phelps is available to pitch if he has to come in during the 2nd or 3rd inning. Just saying.) First pitch is at 4:05pm and it is a FOX game (just letting all the fans that aren’t crazy about Joe Buck & Tim McCarver know ahead of time.)