Will Smith makes his MLB debut tonight for the Royals against the Yankees. His opponent, Andy Pettitte, has 241 wins in 491 career games.

The baseball Gods are laughing. Top 4 payrolls all in last place. #Yankees/#RedSox tied for last, #Phillies and #Angels also in basement.

Is There Light At The End Of The Tunnel?

Through the majority of the 43 games they have played the Yankees have been pretty hard to watch. It is obviously not rocket science why this has been. When you go 6-72 with RISP over a stretch you will not win many games. When your starting pitchers give up homers at an alarming rate and the back end of your bullpen is on the shelf it doesn’t help either. This failure cannot be pinned on one player, but has been a total team failure. How much can really be done to fix this and how long will this continue are the burning questions right now. Despite the lackluster play this year the Yankees are still in a position where they can salvage the season and make the playoffs.

There is not much the Yankees can do at this point in the season other than ride out the storm and hope these players start living up to the back of their baseball cards. Joe Girardi could start flipping tables over but without the threat of Georege Steinbrenner around it would not do much. The Yankees really miss him keeping everybody on thin ice. You know he would have already gone on 5 tirades this year and Kevin Long would be fired already. He made irrational and wrong decisions many times, but he held everybody accountable.  The two things I would suggest at this point are to start Eduardo Nunez in LF when he is healthy (assuming Brett Gardner still isn’t) and move Alex Rodriguez to 2nd in the order. Despite his shaky defense the Yankees really need Nunez for his bat and his speed. It is hard to manufacture runs when Alex Rodriguez leads your team in stolen bases among regulars with 5. Nunez can hit for average and run, which are two things desperately missing right now. His defense in LF cannot be much worse than what Raul Ibanez is giving you. The bloop that he let drop in front of him in the 1st inning on Monday Nunez gets to easily. It seems pretty pointless for Dewayne Wise to be on this roster, as he offers little to nothing of anything. Why not go with a young guy who can actually help?

The other thing that I would do is bat Alex Rodriguez 2nd. A-Rod can still be a very useful player but he is not getting it done in the 4 hole. The 15 RBI A-Rod has is pretty embarrassing when you have 2 .300 hitters and Curtis Granderson in front of you. The reasons for this is A-Rod is only hitting .154 with RISP this year and only has a .408 slugging percentage overall. A-Rod simply has not been providing enough power out of the cleanup spot this year. He only has 5 HR this year and 32 of his 42 hits this year have been singles. That ball he hit in the 8th inning Sunday against Cincinnati was a pretty scary sign. I have seen the ball come off ARod’s bat like that for the last 9 seasons and it has been an easy home run every time.  You can blame the wind all you want but guys like Ryan Ludwick and Ryan Hannigan hit HR’s out there the inning before.  A-Rod is still hitting for a fine average and they need to take advantage of his singles and Granderson’s home runs by swapping them in the lineup. A-Rod has a .369 OBP, which is 2nd among 3B in MLB. A-Rod would be a very good table setter for Cano and Granderson. Why have your big home run threat batting 2nd and a good average guy with little power batting 4th? Girardi did the right thing by getting Mark Teixiera out of the middle of the order and should do the same with A-Rod. 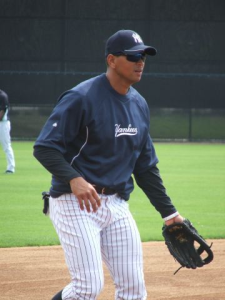 The Yankees offense really can’t be this bad for much longer. It has been to awful for it to be. If you tell me Curtis Granderson, Nick Swisher, Mark Teixeira, Robinson Cano, and Alex Rodriguez are all going to hit under .220 with RISP the whole year then it will be a long year. These guys are still to talented for that to happen. The Yankees are still 3rd in the AL in team OPS and team BA. Assuming the hitting with RISP turns around, which should be inevitable, the offense should be fine. This team is essentially the same one from last year that was only 2 games better at this point last year and coasted to 97 wins. The main difference is something we don’t even know how big of an issue it is yet because they can’t get any leads. That is how the bullpen will hold late leads without Mariano Rivera. They passed their first test yesterday.  They are still only 3.5 games behind what I consider to be their main competition in the division in Tampa Bay.  The Yankees have played brutal baseball for 3 weeks and have only lost 3 games in the standings. Baltimore and Toronto will regret this when they miss the playoffs.

You have to respect what Baltimore has done this year but I have to see their pitching hold up the whole year before I believe it. Their young arms will start to feel the heat of a pennant race that they have no experience in. Also, those young arms will approach innings that they have not touched before. The Yankees have been in much worse spots before. In 2005 the Yankees were 21-29 after 50 games and 14.5 games behind the Red Sox. They won 94 games and the wild card. Also, in 2007 the Yankees were 22-29 and also won 94 games and the wild card.  This team is more talented than either of those teams. Yesterday Wally Matthews tweeted to me that he thinks the Yankees would be willing to ditch their $189 million plan in the offseason if they miss the playoffs. If they are willing to do that you would think they would have no issue adding payroll at the deadline to avoid missing the playoffs if necessary. This season can still end up with the Yankees making the playoffs if they step up and play to the back of their baseball cards. However, if they continue to play like this that will not be the case.  It is up to them.

Good morning all.  It is very nice to start this day with the Yankees coming off of a win.  Hopefully another win tonight as they head into the off day on Thursday.

Let’s start the morning off right with some links…..

— Roger Rubin of The Daily News writes that Phil Hughes gets aggressive against the K.C. Royals, working his way back to 2010 form.

— Anthony McCarron of The Daily News looks into former Yankee A.J. Burnett who has the pressure lifted off of him while pitching for the Pirates.

— Mark Hale of The New York Post says last night was Soriano’s first true test with a save as a New York Yankee.

Well, it had finally happened. After being 6 for 74 with runners in scoring position coming into the game, the Yankees finally had their hit with men on base, and it was just enough to get the win from the Royals. Phil Hughes once again pitched a great game (it was his 5th good start in a row) although he gave up another home run ball. Hughes has given up homers in 9 consecutive starts but hey, as long as the bats are right behind you then there’s nothing wrong with solo-shots.

The Yankees were trailing 2-0 in the 4th inning but they were able to get going on a Robinson Cano solo HR which cut the Royals lead to 1. The last time Robinson Cano hit a HR was off of Luke Hochevar in Kansas City and it was a grand slam. In the 5th inning the Yankees had the bases loaded with no one out and this time, the Yankees made sure that they were able to get some runs in. Derek Jeter lined a base hit that scored a run and Curtis Granderson grounded out, but got the run in.

Those three runs were just enough for the Yankees as Cory Wade, Boone Logan, Clay Rapada & Rafael Soriano backed up Hughes and had 3 scoreless innings. The Yankees are no longer in last place (for today at least) and the Yankees are now 1 game above .500.

Tomorrow is the series finale vs. the Royals and Andy Pettitte will take the mound for the Yankees.