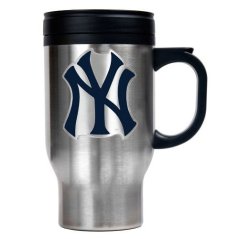 Well the Yankees have won 9 straight having swept the Mets, Braves and Nationals. The Yanks again take on the Braves with the new series starting tonight at 7pm ET at Yankee Stadium. Here are your morning links…

— Nick Swisher was not in the lineup in yesterday’s game because of what he called “like the worst charley horse ever”, and he needed crutches to leave the clubhouse last night.

— C.C. Sabathia through looking back at videotape has noticed a fixable flaw in his mechanics.

— The Scranton Wilkes-Barre Yankees stormed past Syracuse yesterday and are now five games back behind the Pawtucket Red Sox in the International Leeague North Division.

Mike D. is one of 2 co-founders of the Yankees Fans Unite Blog. He has been a Yankees fan for as long as he can remember, growing up in a family of huge NYY fans. His knowledge of the game comes from watching baseball his whole life, and playing third base in high school and college.
View all posts by Mike D. »