Yankee bats own the 1st Inning 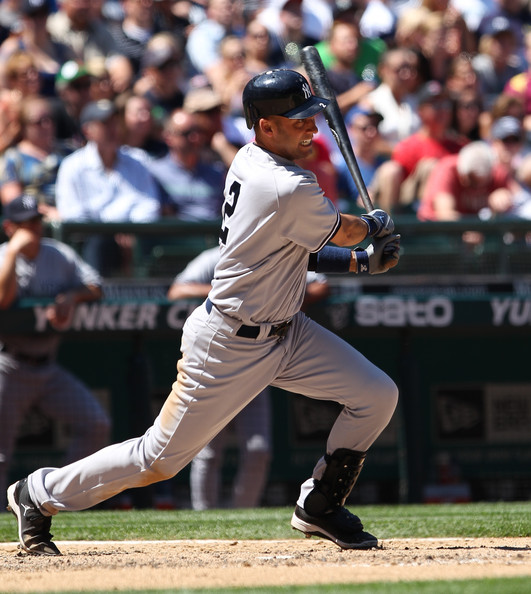 Jeter crushes the ball in the 1st inning

Jumping out to an early lead is a great luxury to have in baseball. It puts your pitcher at ease and immediately puts the opposing team on the defensive.  This year the Yankees have been scoring in the 1st inning more than any team in the A.L. with 76 first inning runs in 97 games.  The first has been their best offensive inning this year as they have not scored more than 65 runs in any other frame.  It often seems like the team will score early then go silent offensively for much of the game.

What could be the reason for their 1st inning success?  The first thing that comes to mind is that the Yankee lineup is very top-heavy.  For much of the past 16 years, they have had a circular lineup that was strong from top to bottom.  However this year’s team has been the lowest scoring Yankees team in years and much of that is due to a poor bottom of the order.  Ibanez,  Jones, Nix, Stewart & Martin have all produced at one time or another but they all have OBP below .300 and batting averages .245 or less.

But a weak bottom of the order shouldn’t account for why the team scores most often in the first.  The top half of the order comes to bat throughout the game, not only the 1st.  However, when you look closer at the stats for the guys at the top of the order, they all excel in the 1st inning.

Derek Jeter may not be the most patient of leadoff hitters but he has been an absolute beast leading off games for the Yankees this year.  In Jeter’s 94 games hitting leadoff, he has hit .419 (39-93) with 7 Doubles, 5 HRs  and a 1.067 OPS opening the game.  During the rest of the time, he’s hit .276 with 3 HRs in 315 ABs so why the big difference?  It seems he is incredibly aggressive in the first inning as he’s only walked twice.  His aggressiveness coupled with a pitcher’s tendency to want to get ahead and throw a lot of fastballs seems to be the recipe for Jeter’s success as he tends to jump on the first fastball he sees.

So what does it mean that the 1st, 2nd & 3rd hitters in the lineup rake in their first AB and are mediocre at best the rest of the time?  It’s difficult to know what to make of these numbers.  Part of it could be small sample size coincidence.  But I think it could also have a lot to do with pitcher’s tendencies to throw a lot of Fastballs early and mix it up more as the game goes along.  All 3 are veteran hitters and with Alex & DJ having lost some bat speed, they may be cheating on those fastballs early in the game.  The only other possibility could be that they wear down and tire a bit over the course of the game since they have all played a lot this year.

But your guess is as good as mine.  Does anyone else have any theories why these guys crush the ball in their first ABs?  In general, pitchers are usually toughest their 1st and 2nd time facing hitters before getting hit much harder their 3rd time through the order.  This hasn’t really been the case vs the Yankees lineup.  Whatever the reason it’s good that the team is jumping out to early leads but their tendency to not tack on runs as the game goes along is troubling. With ARod out for a while now, it’s probably best to bat Granderson down a bit in the order to benefit from his HR power in more of an RBI slot so the 1st inning trio will be broken up for a while and we’ll see if the runs continue.

Good morning all.  After an ugly road trip out west the Yankees came back with a win yesterday afternoon.  Today is an off day.   The Yankees are reportedly not interested in making a big trade for a replacement for A-Rod.  So it seems they will stick with what they got unless those reports are just a smoke screen.   Yankees baseball is back tomorrow as they will be back in the Bronx to play the Boston Red Sox.

Enjoy the day.  Now onto the links…

— Bryan Hoch of mlb.com has a lot of tidbits of the Yankees such as: Recovery for A-Rod is underway, Swisher targets Friday to be back & Keeping Chavez healthy is key.

— Wallace Matthews of ESPN NY writes that A-Rod’s injury won’t be a big blow for the Yankees to overcome.  What do you think?

— Jon Heyman of CBS Sports reports that they Yankees are looking into Wigginton or another player to share part time duty with Chavez at third.

— John Nalbone of The Star Ledgers has the story on Cano & Robertson who will be at the Trenton Thunder game today for charity.

It was a tight ball game for the Yankees as they had a 2-1 deficit. The only run the Yankees scored at that point was a home run by Derek Jeter, but when the Yankees got to the 8th inning, everything changed. Derek Jeter was hit by pitch to start the rally and at the end of the rally was Jayson Nix. The bases were loaded for the Yankees when Nix pinch hit for Raul Ibanez and delievered a 3 run double to give the Yankees a 4-2 lead. Russell Martin scored the 5th and final run after Eric Chavez was intentionally walked.

Ivan Nova wasn’t as sharp as usual but he lasted to the 6th inning giving up 2 runs on 2 hits.

Tomorrow is a Yankees off-day and on Friday, the Yankees will take on the Boston Red Sox for the weekend series.