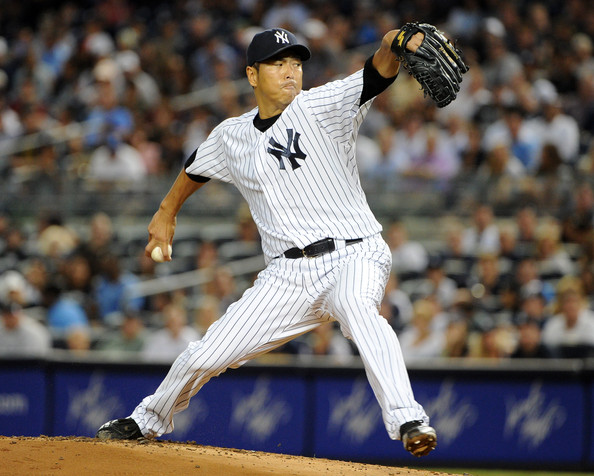 When Brian Cashman signed Hiroki Kuroda in January on Friday the 13th, the move was totally overshadowed  by the trade of Jesus Montero for Michael Pineda announced on the same day.  While most were patting Cash on the back for acquiring a possible #2 for the Yankee rotation, they were talking about Pineda.  Kuroda was thought to be a decent veteran pick-up who could eat innings as a back-end starter.  While we all know what happened to Pineda, Kuroda has done his utmost to pitch like that #2 starter the team was looking for.

While Kuroda had some ups and downs early in the season, he’s found his groove and is currently one of the top pitchers in the American League.  He leads the team and ranks in the Top 10 in Wins (8th), ERA (10th) & WHIP (8th).  Coming from the NL West to the AL East, most thought his numbers would suffer as the competition is greater and the ballparks are smaller.  However, thus far his numbers are nearly identical to his career numbers in the N.L. in almost every category.  This is astounding since even if he wasn’t facing better lineups (which he is), just moving from Dodger Stadium to Yankee Stadium should cause a stark change in his performance. But Kuroda has been even better in his new, smaller home park going 7-3 with a 2.63 era, 1.02 whip and tidy 0.77 HR/9.

Wins are definitely not an accurate stat to measure a pitcher’s worth as Kuroda never won more than 13 in a season with L.A. due to playing for bad teams and weak offenses.  Coming to NY, we all figured that would change.  However, Kuroda still has not gotten a lot of support from his offense.  He’s last among the Yankees 5 starters in Run Support and ranks 83rd in MLB out of 103 qualifying starters with 4.05 runs of support per game.  By contrast, CC averages 5.76 runs of support and Nova gets 5.31 runs.  The team has scored a total of just 5 runs combined in Kuroda’s last 5 losses.

The one area where Hiroki needs to improve is pitching early in games.  He has a tendency to give up runs in the beginning of the game before settling into a groove and throwing up zeros.  He has a 5.85 ERA in the 1st inning and a 4.28 ERA in innings 1-3.  The rest of the game his ERA drops to 2.42.  Looking at his career numbers, this isn’t a new challenge for Kuroda as he’s always had it rough in the opening frame.  This is a problem that is common in Sinker ball pitchers as they sometimes overthrow the pitch early in games when their arms are strong instead of allowing the pitch to get it’s natural downward movement.  Some pitchers try to overcompensate by warming up for a longer period of time or even jogging prior to starts to tire themselves out.  I’ve never believed in those  types of things and would prefer Kuroda to just attempt to focus on not overthrowing and mix his pitches more early in games.

Through 21 starts, Kuroda has turned out to be the best starting pitcher Cashman has acquired via Free Agency or trade since C.C.  While he’s been everything the Yanks could have hoped for so far, his true test will come in the post-season where it looks like he will be starting Game 2 or 3 in the playoffs.  If he can pitch the way he has over the last 12 starts, the Yanks will have the complement to CC they have long been searching for.  What do the rest of the Yankee fans think of Kuroda?  Do you trust him yet enough to pitch Game 2 or 3 in the playoffs or do you think he’s pitching over his head so far and will come back to Earth?

Was a 4-yr Pitcher and Communications Major at Seton Hall University in the 90s. His knowledge & opinion of the game comes from his background as a player and ardent lifetime Yankee fan. However, Fishjam also incorporates sabermetrics and statistical support to form a well-rounded view of the game.
View all posts by fishjam25 »