Skills: After reviewing the raw data, the thing that jumps out the most is his ability to work the count and look for a pitch to drive. If it’s not there Joseph will gladly take his base. I’ve seen it mentioned that Corban is one of the systems best pure hitters; between his plate discipline and his quick compact swing and his ability to drive the ball to the gaps, the only thing that was missing was a power stroke. That became apparent in his 2012 campaign as he bested his career power numbers. He wasn’t hitting the “just enough” home runs either; this kid can put a hurt on the ball. Earlier this season he recorded one of the longest home runs playing in LeHigh Valley. He also hits a ton of line drives, ranging between 19-22% in his minor league career. The onset of power, his already excellent ability to choose his pitch and make solid contact along with a high line drive rate bode well for a major league career.

On the other side of the plate is where Joseph falls short. While he does have good athleticism and arm strength for the position, he lacks that quick first step and reaction times for a second baseman. He’s spent the majority of his tenure at second, but has also been positioned at 3B, as well as LF, possibly in the hopes that he can be used as a utility player for the big club as second base is currently occupied in the BX. While he may never be an above average defender, his bat could more than make up for an up the middle guy. Corban doesn’t possess incredible speed and will never be a stolen base threat, but he’s good enough on the bags that he isn’t a liability either.

Overall: Drafted as a shortstop and quickly moved to second base, Co-Jo will never amaze anyone with his glove; it’s his bat that will carry him to the majors and from what i’ve seen so far that’s a real possibility. One of the things I noted in researching Corban was his work ethic and his neverending pursuit of improving himself at the plate. It’s one of those “skills” i’ve come to value rather highly; you can’t teach certain things, and #want is one of them. He’s been known to spend hours in the video room looking for ways to improve at the plate, and preparing for his next matchup.

With second base likely locked up for several seasons by some guy named Robinson Joseph will end up a utility player or trade bait in the next year or two, barring injury or the slight chance that the Yankees let Cano walk. If by rare chance Cano does leave the Bronx, Joseph could find himself manning the position alone, or as a dangerous end of a platoon split with David Adams. He absolutely raked against righties this past season, posting a .299/.401/.560/.961 line hitting all of his HR’s (13) against opposite handed pitchers. He also walked more than he struck out (43/38), which is pretty awesome. A five time All Star between the MiL org. lists, EAS, FSL and SAL, Corban made a big step forward by adding power to his already impressive work at the plate. He likely won’t be in line for any Gold Gloves or turning heads over at The Fielding Bible awards, but his stick should be enough to carry him through a big league career. Afull time future in the Bronx would certainly be dictated by what happens with Cano, but a possible utility role is not out of the question. If not the hope is that he could bring a decent return in trade, as his skill set could net him a sarting job elsewhere.

Cano is the Yankees MVP

The Yankees do not have a true AL MVP candidate this year, even though people are trying to make Derek Jeter into one. Jeter, who is obviously one of the most popular players in team history, is having a fabulous year, but is not a true AL MVP candidate because he is not even the MVP of his own team. That title still goes to Robinson Cano, despite the notion that he is only having an average year.

A lot of the views on this have to do with expectation. People thought before the season that Cano would be competing for the AL MVP. While he is not doing that he still should be solidly in the top 10 of the voting and is a borderline top five candidate. At minimum he is still the team MVP by a good margin over Jeter.

This is not to discredit Jeter’s season at all. The fact that we are even having this discussion about him this season is stunning. However, the facts remain that Cano has had the better season. The only advantages Jeter has over Cano are batting average, which is wiped out by the fact that Cano has a higher OBP, and that he has hit in the clutch better. Cano should have way more than 82 RBI, but he has a .762 OPS with RISP, while Jeter has a .788 OPS with RISP, so it’s not that big of a difference to make up for the fact that Cano basically leads everything else.

Cano has double the home runs Jeter has, his WAR is 6.2 compared to Jeter’s 3.5, he has an .890 OPS compared to Jeter’s .800 OPS and he has an .377 w/OBA compared to Jeter’s .350 w/OBA. Jeter’s game isn’t based on power, but again his advantage in average is washed out by the fact that Cano’s OBP is higher. Cano holds a huge edge in all the power and slugging numbers, which is a big deal. Also, we have not even gotten to the difference between them defensively.

Cano absolutely blows Jeter away in the field. Cano is one of the best at his position defensively, while Jeter is one of the worst. Jeter may make all the routine plays, but his range is awful at this point. You can even see the difference in range when Eduardo Nunez has been at shortstop lately. Cano has a great 6.1 UZR and his 4.67 range factor ranks 2nd in the AL among second basemen. He turns the double play as quick as any second baseman in the league with his amazing arm, great footwork and a lightning fast transfer. Also, he can make throws falling away from first base that no other second baseman can.  Jeter on the other hand is on the opposite end of the spectrum. Jeter’s UZR is an egregious -13.4. UZR is not everything in determining range, but if you watch Jeter you can tell his range is very limited at this stage in his career. The Yankees can live with it because Cano and Mark Teixeira are elite defenders and Alex Rodriguez is above average.

The point of this article was not to discredit Jeter at all. It is amazing to watch him put up this season at the age of 38. He is a legend and as the captain is still the unquestioned leader of the team. Nobody could have seen this coming and watching the legend play this year has been one of the highlights of the season. However, the numbers don’t lie and they say Cano is the MVP of this team despite Jeter being the one mentioned in MVP talks. The Yankees have been very fortunate to get this kind of offense from their middle infield. Nobody else can really compete with them. However, despite the perception, Cano has had the better season out of the two of them.

Morning Bits: Ivan Nova pitching himself out of the playoffs, Gardner on the playoff roster? & more… 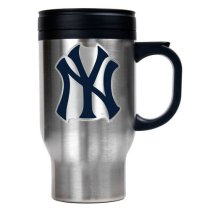 Sticking with the old mug for good luck

Good morning all.  Yankees lost yesterday which is going to make the rest of these games a lot more interesting.   Yankee game tonight is scheduled for 7:07PM EST.  On the mound will be Kuroda vs. Jenkins.   Baltimore will be up against Boston and Texas will be up against Angels.

Enjoy the weekend.  Let’s get to some links….

— Andrew Marchand of ESPN NY looks at which would be best for the Bombers the 1 or 2 seed.

— Bryan Hoch of MLB.com has some tidbits such as A-Rod is cleared to DH, Tex is feeling better after testing his calf strain, and some might find this interesting the Yanks are pondering adding Gardner to the playoff roster.

— Hoch also has the updated path to the post season.

— Hal Bodley writes that the Yankees best move was bringing Andy Pettitte back.

— Mark Feinsand of The Daily News writes that Ivan Nova is pitching himself out of the playoffs.