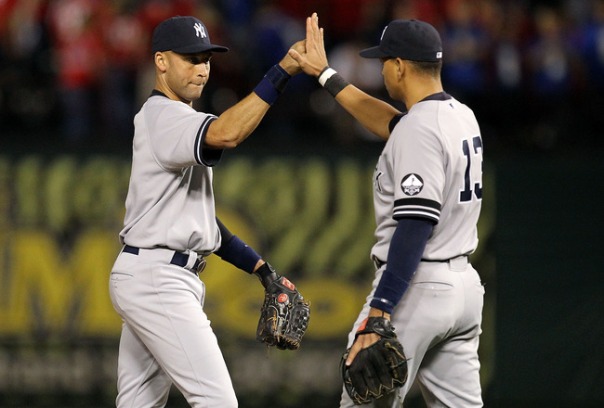 There’s been a ton of talk about change that is needed for the Yankees to go even further in the playoffs in 2013. Some suggest blowing the team up, while others suggest slight tweaking and bargain-bin signings could get the job done. But what most likely will not change, despite Yankee fans’ cries to, is the left side of the infield, which has been a constant for New York nine straight seasons, and should be again for its tenth.

Right now, when you think about Derek Jeter’s 2012 season, you’re still picturing him falling to the ground and being helped off the field in Game 1 of the ALCS. What would be a broken ankle put a startling and abrupt end to one of the Captain’s best seasons, even though his “prime years” have long past. The 38-year old recorded 216 hits (good for a .316 batting average) and was a true jumpstart to the lineup atop it as the leadoff man. His leadership at the plate and in the field matched no other, and say what you want about his range, but he did not cost the Yankees any games in 2012 and hasn’t cost them much more in his 18 seasons. We’ll keep replaying that injury in our minds up until the Captain takes the field again in 2013, which is unfortunate, because up until that moment we saw an incredible season from a future Hall of Famer and one of the true Yankees legends. Grade – A

As great a season as he had this year, expect that ankle injury to slow some of Jeter’s abilities in 2013. We’ve all counted him out before, but it was because of age and not necessarily any physical derailment. Now, he just went under the knife and had surgery to completely repair the ankle, and won’t be back for 4-5 months. He could still start more games at shortstop than at DH, but expect Derek to get a lot of time off and the Yankees to treat him very cautiously. Even still, hitting wise, the man’s a god, and should put up numbers that will be heads and shoulders above any other 39-year old starting shortstop.

2012 was definitely a trying year for A-Rod, as once again he couldn’t stay healthy and missed 40 games in the regular season. But when he was on the field he was an above-average third baseman, and that’s saying a lot considering he too is past his prime. He is one of the best defensive third basemen in the game, and that alone was a big help to the Yankees in 2012. And yes, we all know he didn’t hit 40 home runs or was an MVP contender but that era of A-Rod baseball ended in 2007. 18 home runs, close to 60 RBIs and a .272 average are great statistics for a former steroid user who’s in what would be the twilight of a player’s career. Don’t blame him because Joe Girardi decides to bat him third or fourth every night. Grade – C+

His postseason was absolutely horrible, I get that. But so too was any other Yankee player excluding Derek Jeter. So go ahead and come up with any trade ideas you think can get him out of New York, but it’s time to accept it: Alex Rodriguez will be the Yankees third baseman in 2013. Say what you will about his production in October, as detailed he still is a solid third baseman on all sides during the regular season. I expect similar numbers from him in 2013, and maybe even slightly bigger stats should he stay healthy. Which is a big “if”, and the Yankees probably should rest him a bit more than they did this year. But if they do, and A-Rod just does what he does best, and that’s hit, look for another good year from him, despite all his apparent issues this fall that were just simply a 9-game slump.

Good Morning.  Giants now with a huge 2-0 game lead.  It’s Friday thank god for that.   Lot’s of Yankee things to talk about it let’s get right to the links….

— Tex and A-Rod were on the top ten list of worst contracts in MLB done by ESPN.

— Bryan Hoch dives into the big topic of Mariano and him maybe wanting to retire.

— The Daily News has all the latest on C.C.’s elbow.

The Austin video did well yesterday how about a Ronnier triple video:  Enjoy