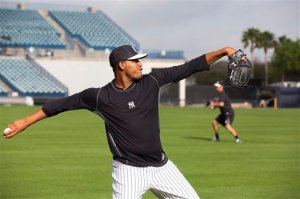 Day three of Spring Training has come to a close, meaning it’s time for another Spring Training report. Yesterday was all about Andy Pettitte and Mariano Rivera. Today, our Spring Training notes travel further back in the rotation (and briefly at third base). Today, we take you into the competition for the fifth starter spot between Ivan Nova and David Phelps, who had a great rookie season with the Yankees last year.

We should start by discussing the battle for the 5th spot between Nova and Phelps.

Nova vs. Phelps: Who gets the fifth spot?

Ivan Nova doesn’t know what went wrong last season after he posted  7.05 ERA after the All-Star Break. He does know that the fifth starter spot is his to lose to David Phelps.

“He has to go out there and prove himself. That’s the bottom line.” Girardi said. “Because of what he went through the second half of the season, he has to earn a job. You’d like to think that every starter would go out and earn a job, but we know that’s not realistic. I don’t think we’re going to look at CC’s numbers real heavily, or (Hiroki) Kuroda’s.”

Coming into camp, it seemed that David Phelps had the disadvantage due to the fact that he was in a bullpen role last season? So does that mean Joe Girardi will judge Phelps on whether he’s a bullpen piece or not?

“We’re going to look at (Phelps) as a starter going into camp because that’s what we project him as in the future. And we’ll make adjustments if we have to.”

So for those of you who plan on watching almost every Spring Training game (or if you have MLB.TV where you would technically only miss three games), then this is the year for you to watch who gets the fifth rotation spot.

Michael Pineda loses weight and could be ready by June

Michael Pineda went to Spring Training camp in better shape than he did last season, weighing in at 260 and ready to work towards returning to the Yankees in June. Brian Cashman answered questions about Pineda but mostly gave a prognosis on where Pineda was at this point.

“Mike’s doing well so far.” Cashman said. “He’s completing his first week on a full mound, he’s had no setbacks, he’s worked very hard and it’s a very serious surgery he’s coming back from. No guarantees but so far we’re optimistic.”

If all goes well, Pineda could be back with the Yankees before the All-Star Break.

Kevin Youkilis came to Yankees camp for a few minutes earlier today, but he did get his work in while at the minor league complex with some of the other players. Youkilis seemed excited to see teammate Juan Cedeno, who he knew since they were both in the Red Sox organization at one point. Youkilis got to Tampa at 6:30 this morning and went to work out at the minor league complex. Eduardo Nunez was also spotted in the Yankees clubhouse. Probably getting his work in.

A big reminder, tomorrow is the voluntary report date for the Yankees position players but we should expect more of them coming in the coming days. To Girardi’s knowledge, none of them have visa or transportation issues. Also, someone might want to call Robinson Cano. Remember in 2010 when he showed up a day late to camp because he had the dates mixed up? Yeah…

Posted in No Category, Spring Training

MLB on FOX to air eight Yankees games this season

It’s that time of the year again where MLB on FOX releases their dates and times for games they plan on airing during the 2013 season. As we all expected, the Yankees are there with eight games this season (the Red Sox have the most in the AL East with nine. Don’t ask me why.) The Yankees are slated to take on the Red Sox five times during the “Game of the Week” which starts on April 6, 2013. The Yankees will open up MLB on FOX against the Tigers at Comerica Park. Here are the list and times for each game.

Good morning all.  Let’s get right to the links….

— Check out day two of Wallace Matthews State of the Binder.

— Bryan Hoch writes about how Mo will decided on his future before opening day.

— Mike Bauman of MLB.com writes not to bet against Mo even though he is coming off of a torn ACL.