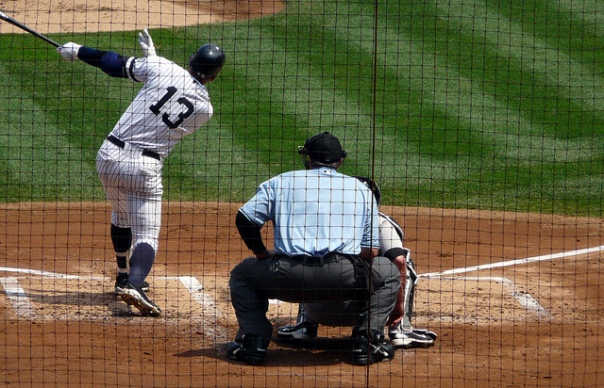 On this day 9 years ago the Yankees finalized a deal that brought Alex Rodriguez to New York for Alfonso Soriano and a player to be named later.  The framework of the deal included Texas agreeing to pay $67 million of the $179 million left on his contract, giving A-Rod roughly $16 million a year, or $14,403 per nine innings.

Has it really been 9 years?

During that span we have seen one of the greatest players of all-time (even if you don’t like the guy you have to admit this) win two MVPs, destroy everyone in the 2009 postseason, and hit his 400th, 500th, and 600th career home runs. We have also seen him disappear in more than a few postseasons, admit to taking PEDs, date Madonna, and slap the ball out of Bronson Arroyo‘s glove. Has there ever been a more schizophrenic career in the history of baseball? (Don’t say Milton Bradley because he may have actually been schizophrenic.)

There are two interesting subplots to this story that are often forgotten. The first is that the Yankees were not even in the market for a third baseman until Aaron Boone tore his ACL during a pickup basketball game in late January, an unfortunate injury that not only ended his season but violated his contract with the Yanks. All of sudden there was a hole to fill.

Secondly, Boston blew it. They had A-Rod locked up and I spent most of the ’04 Christmas season petrified that A-Rod would end up with Sox and hit pop flies onto Lansdowne Street for the next ten years; but Boston couldn’t get out of its own way. They nearly landed Rodriguez in December, but a proposed deal fell through that would have sent Manny Ramirez to Texas. Boston was golden until the Players’ Association stymied their attempt to restructure Rodriguez’s monster $252 million contract that apparently would have lowered its value by roughly $32 million. Ten months later the Sox didn’t look so foolish as they wrapped up their World Series sweep, giving them their first title in 86 years, nevertheless, it’s an interesting backdrop to one of the biggest trades in Yankee history.

What are your favorite/least favorite A-Rod moments? Share them in the comments section below.