Derek Jeter just heard of Kevin Youkilis making the back of every paper in New York City with his “I’ll always be a Red Sox” comment. Andy Pettitte suggested it would be a good idea for Jeter to start some controversy to get everyone’s mind off of Youkilis.

“Pettitte just told me. He told me to say something controversial in this press conference so that I can get Youkilis off the back pages.” Jeter said. “I’ll let him have it. Welcome to New York.”

Jeter then became serious while throwing in some quips now and again about how hard he was working to get into shape. He then poked fun of the New York Post cover where Jeter was considered “overweight.”

“It’s going to be a little harder to to get back in shape–in baseball shape. The Post is here. Gotta say baseball shape.” Then Jeter’s conference got down to business. Where was he in his Spring Training schedule?

“I’m on Mo’s schedule.” Jeter quipped. “Five innings and I’m done. But I’m not concerned with re-injuring the ankle. I know I won’t play be playing when they start playing in a week. You can write that down. I’m not playing in that game. I don’t necessarily think you need all of Spring Training to get ready. I don’t know exactly the date I’m going to play, but it will probably be somewhere there after a couple of weeks.”

The most interesting part of the whole conference? Derek Jeter thought that sitting on his couch for 5-6 weeks was boring and this was the “worst offseason ever”. 5-6 weeks on the couch doing nothing sounds like a dream to me.

— Along with Derek Jeter, Mark Teixeira spoke to the media today and basically disclosed what he wanted to do this season.

“There’s really no reason for me at this point in my career to try and start things differently. I’ve had such a successful career playing to my strengths. Now that being said, I want to be the best at what I do well, and that’s hitting home runs, driving in runs and playing Gold Glove defense. I know if I do those three things, I’m going to help my team. At the end of the day, that’s why I’m here. I’m here to help my team win. Not put up certain types of numbers.”

Last question. Was it strange not seeing Alex Rodriguez in camp?

— Ichiro Suzuki, Brett Gardner, Travis Hafner and Curtis Granderson all reported to camp today and took their physicals. They all passed, don’t worry.

— Backtracking  to Ichiro, he was reportedly wearing one ‘glittery’ hat. He came into camp this morning with a Yankees hat but the Yankees logo had glitter on it instead of the normal logo.

— Joe Girardi made it clear that Travis Hafner would be the Yankees DH against right handed hitters and wouldn’t take the field unless he was a backup first baseman. Girardi also said that Jeter could possibly DH against left-handers as the season begins, allowing Eduardo Nunez to play shortstop.

Accept it: Kevin Youkilis is a Yankee 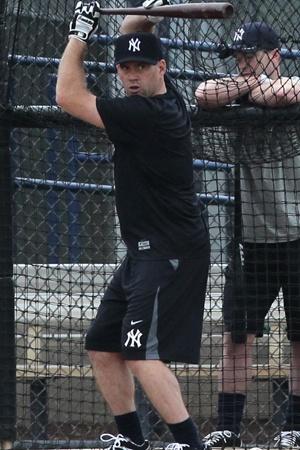 Not even one full day into his first day at spring training, the few sentences said by Yankees third baseman Kevin Youkilis sent fans and the media into a frenzy. Likely a few hours after he was sized for his pinstripes, Youk was telling reporters he’d always be a Boston Red Sox.

He’s learned now, but that’s a big no-no and certainly not something that will go unnoticed in the big New York spotlight. Of course, his allegiance to Boston spread all over the back pages of newspapers was not the only quote he gave, but it was the only one people cared about.

Already on Yankees fan’s bad side, Kevin Youkilis said he will always remember the first nine seasons of his baseball career, which just so happened to take place with the Bombers’ biggest rival. Two World Series rings, three All Star appearances, a Gold Glove and Hank Aaron Award, and he is being ridiculed for saying he enjoyed what he accomplished there? Are fans truly clinging to any little thing he says that sounds the slightest anti-Yankee? That is truly pathetic.

Now, there’s not a fiber in my body that tells me a clean-shaven Kevin Youkilis wearing our beloved Yankee pinstripes is right. This is not a plea of defense nor show of love to the  guy who batted .235 last season and yet received $12 million, from an apparently penny-pinching Yankees front office. But it’s just me accepting it.

Many people have brought up the argument that players like Sparky Lyle, Wade Boggs, Roger Clemens, and Johnny Damon all started out as hated rivals in Beantown, and ended up becoming fan favorites [and more importantly, World Series champions] in the Bronx. Did any fan really expect those four “idiots” to put on the pinstripes, play with Yankee pride and partake in some of the greatest moments the team has ever had? I don’t think so.

I’ll give you a moment to reminisce about Sparky’s 1977 Cy Young season. Or Boggs riding the horse after ’96. Don’t forget Clemens’ postseason dominance either. Or Damon’s double-steal.

Yankees fans have been considered vulgar, ignorant, downright stupid and clueless in the past. They have also been known as classy, every now and then, for cheering for whoever is wearing the pinstripes. I’m not a fan of A-Rod and a number of guys on the team. But I still support them and cheer for them. Why? Because they’re Yankees. And Kevin Youkilis is now one too.

So forget what he was, as he is now a player for our favorite team. Forgive and forget. Give him a chance. All those statements and more apply. The fact is, you don’t know anything until you know everything. Who knows what these upcoming 162 games have in store for Youk. Only time will tell. Not me or you.