Gardner gets work in while Yanks fall to Orioles 5-1

The travel roster for today’s Yankees/Orioles game seemed a bit off. Only one locked in Opening Day starter made the trip while the rest of the travel roster included non-roster invitees, minor leaguers and players off the 40-man roster. The Orioles played a lot of their regulars, overpowering the young minor leaguers while the Yankees dropped their second straight Spring Training game 5-1 in Sarasota.

While Yankees fans and staff enjoy Gardner’s grittiness, Gardner dove into first base to confirm a lead-off infield single. The single was good. The issue? Gardner dove into first base one day after Curtis Granderson broke his forearm. Gardner quickly erased his small error, perfecting a bunt single and hitting a line drive into left center field.

The lone run for the Yankees came in the 9th inning after young Corban Joseph prolonged the inning with a single, then stealing second which was a risky move since there were two outs in the inning.

— The Yankees will play the Philadelphia Phillies in Clearwater, tomorrow at 1:05pm. Mark Teixeira, Robinson Cano, Ichiro Suzuki, Kevin Youkilis, Joba Chamberlain and David Robertson are expected to make the 20 minute bus trip. The game will air on MLB.TV and I was also told it would air on MLB Network.

Granderson’s Injury Is An Opportunity 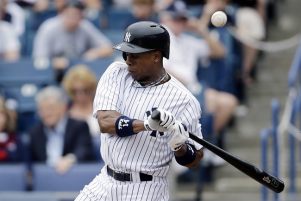 There isn’t much going on in the sports world in late February.   Yesterday afternoon’s menu for sports fans wasn’t very attractive.  There were some NHL and NBA games, but those sports don’t start the postseason for a couple of months yet and 16 teams make the playoffs in those sports anyway so the drama is limited.  There were some NCAA men’s basketball games on, but every decent team makes the tournament these days, so how excited can anyone get over a regular season game right now? The PGA tour was holding the first WGC event of the year but the match play format is a novelty event held on the PGA tour only one time each year, and to many of us that one time is one time too many.  It looked like some MLB preseason games might actually be the cream of the crop as far as sports viewing was going to go.  It appeared to be a lazy Sunday afternoon without much drama to unfold in the sports world.  That all changed when J.A. Happ threw a 2-2 fastball that caught Curtis Granderson on the right forearm in his first appearance of the 2013 Grapefruit League.

By now the whole world knows that Curtis Granderson is expected to miss at least ten weeks with a fractured right forearm.  Granderson will miss anywhere from 4-6 weeks of the regular season while he heals.  While this event was certainly newsworthy and not a positive event for the Yankees, it certainly isn’t the apocalyptic event that many have proclaimed it to be.

When we last saw Curtis Granderson, he was flailing away hopelessly and comically at pitch after pitch in the 2012 ALCS.  Granderson was a disgraceful 0-11 in the ALCS with two walks and seven strikeouts.  In the 2012 ALDS series vs. the Orioles, Granderson was a feeble 3-19 with one walk, nine strikeouts, and one RBI which came on a solo home run in game five.  Granderson’s 2012 postseason stat line was a pathetic 3-30(.100) with one HR and one RBI. While many Yankees were cold as ice in the 2012 postseason, Granderson’s struggles in 2012 didn’t begin in October.  Granderson was lost at the plate from August until the end of the season in 2012.  Granderson was 41-200(.205)  with only twenty walks from August 1st through the end of the 2012 regular season.  While Granderson did hit 15 homers in that time span, he was basically an all or nothing hitter that couldn’t make simple contact and advance runners. When you add his laughable postseason stats to the equation, Granderson was as much of a hindrance to the Yankees as he was an asset down the stretch of the regular season and in the postseason.

The simple fact is that Curtis Granderson hadn’t been the Curtis Granderson that anyone wants or longs for since July of last season and it is unlikely to assume that he will ever be that Curtis Granderson again.  Granderson’s inability to hit breaking pitches had pitchers feeding him a steady diet of breaking balls out of the zone in the second half of last season and I see no reason why that would change this season or anytime in the future. While Granderson’s power will be impossible to replace, his total value to the team is vastly overrated. An average CF at best these days, Granderson was already assumed to be moving to LF  for the 2013 season, with Brett Gardner taking over in CF.

Granderson’s injury gives the Yankees four options to replace him.  The first option is to let Matt Diaz and Juan Rivera battle it out in spring training for the position.  That option seems a bit like the “battle” already going on between Chad Stewart and Francisco Cervelli at the catching spot.  No matter who wins the battle, it makes it tougher to win the war.

The second option is to sign a reclamation project/golden oldie such as Johnny Damon(age 39) or Bobby Abreu(turns 39 on March 11th). While some fans, nostalgic and sentimental as they may be, would welcome such a move, there is a very good reason why players like Damon and Abreu are available. They’re done, through, finished and over with.

The third option would be to trade for an overpaid, over the hill player like Vernon Wells(age 34) or former Yankee Alfonso Soriano(age 37).  Trading prospects for either of these guys doesn’t seem very sound, no matter how much money their current teams eat in the deal.

Option number four? It may be too much to hope for, but certainly makes the most sense.  To say that  Brian Cashman and Joe Girardi have been reluctant to use young players would be an understatement of epic proportions.  Girardi and Cashman act as terrified of starting a young player as two college kids staring at a home pregnancy test are of the plus sign appearing.

Alas, necessity is the mother of all invention, and perhaps Cashman and Girardi will allow the need for an outfielder motivate them to reinvent their own strategies and allow Slade Heathcott, Ronnie Mustelier, Tyler Austin, or Zoilo Almonte play left field for the Yankees.

By all accounts Heathcott was outstanding in the most recent Arizona Fall League.  Several scouts referred to him as the best player in the league.  Heathcott is a five-tool player and viewed by many as the most talented member of the entire Yankee farm system, even more talented than catcher Gary Sanchez.  The biggest knock on Heathcott by many scouts is his intensity. A popular school of thought is that Heathcott’s eagerness may add to his injury prone nature.  If that’s the worst thing you can say about a player than he is the kind of player I want in a lineup as soon as possible.While injuries have delayed Heathcott’s major league debut, he is 22 years old, and they all have to be rookies sometime.  Is it a stretch to send someone from high A ball to MLB? Perhaps, but it wouldn’t be outrageous based on Heathcott’s age and performance in the AFL.

If not Heathcott? How about Tyler Austin,  Ronnie Mustelier or Zoilo Almonte?  All are talented and need to be given a chance sooner than later.   Given the choice between letting these youngsters battle it out instead of Diaz and Rivera or antiques like Damon or Abreu or trading for Wells or Sorianojust makes sense.  Mike Trout was considered a great future talent who was too young to play in MLB at this time last year and now he’s considered by many to be the most talented player in MLB. You don’t know until you try them.

Now is the time to give these younger players serious consideration to replace Granderson, especially with a Yankee team that is looking older and older by the minute. Fans are ready to embrace new young players and the lackadaisical attitude that an all-veteran team is vulnerable to was on display in the 2012 postseason.  Young blood is not only good for a baseball team, but is often vital.  Giving these kids a serious shot at taking over Granderson’s outfield slot represents an opportunity to inject some badly needed youth and energy to the Yankees while motivating the young players in the Yankee system by showing them that home grown players under age 25 are allowed to start games in the Bronx.