Note: Mariano Rivera is slated to make his Spring Training debut, so make sure you tune in!

UPDATES: Derek Jeter went 1-for-2 today, with a lead-off single in the first inning. Mariano Rivera had a clean 1, 2, 3 5th inning, striking out two batters with effective cutters. 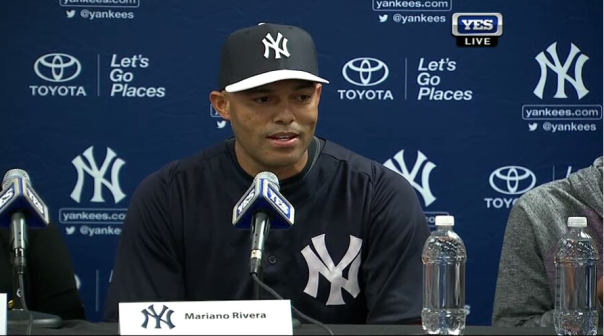 When the press conference started at 10:00 a.m, Mariano Rivera started off the conference by joking thanks to Brian Cashman, he was able to get a two-year extension for the 2014 and 2015 season, even saying that it was out of the norm for the Yankees organization to make extensions during the year. However, his emotions turned serious when he said that after the 2013 season, the greatest closer would announce that he was retiring after the season ended.

From Brian Cashman, Hal Steinbrenner, the entire Yankees roster to his family, they each filled their seats in order to hear the iconic closer, begin his swan song, saying that although it was a difficult decision, the time to retire was now.

The factoring decision was there was only a little bit left in his tank, and he would use every “bullet” he had left this season. He got tired of the constant traveling, the hotel rooms but he would put his tiredness aside when it came time to get on the diamond and close games. The situation was different last season as Mariano tore his ACL and was sidelined for the rest of the 2012 season. He did say that if he didn’t have the injury, then he would have retired but of course a prideful Mariano Rivera wouldn’t have wanted to go out on a low note.

He thought of his teammates Andy Pettitte and Derek Jeter as his brothers, and even told his teammates to cherish every moment they have on the diamond together. He also said it’s not a sad time for him, and he thanks God for allowing him to play America’s favorite past time.

“There is only one Mariano Rivera. There won’t be another person who will come along and do what he did. No one does it like him. It was an honor to catch him and play alongside him for as long as I did. He made my job as a catcher so much easier. Mariano is a special person and obviously a special player.

“I’m so happy he is going out on his terms. Now every time he steps into a ballpark this year, teams and fans can celebrate and appreciate what he has meant to this great game we play.”

But just because Mo plans to retire after the season, don’t expect him to pull an “Andy Pettitte” and come back after retiring. For him, for the greatest closer…this is it. It’s Mariano’s personal 9th inning, and at the end of the season it will be Game Over for the sports greatest closer…forever.