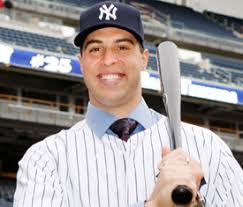 Two days before Christmas of 2008 the Yankees and their fans received what they thought was a fantastic present.  It was on December 23rd, 2008 that highly sought after free agent Mark Teixeira agreed to terms with the New York Yankees.  The Yankees had made Teixeira an offer weeks before, but had withdrawn that offer, leaving the Angels, Nationals, Orioles and the Yankees archrival Red Sox as to battle over Teixeira.  The Red Sox offered Teixeira 168 million dollars over eight years and Teixeira appeared on his way to Boston.  The Yankees came over the top of Boston’s offer by offering 180 million dollars over 8 years and Yankee fans rejoiced not only because one of the premier first baseman in the game was headed to the Bronx, but also because the Yankees had swooped in and stolen him from the Red Sox.  Four years and almost three months later, it’s debatable as to which team actually won that day.

When Mark Teixeira was signed by the Yankees he was 28 years old and had played seven full seasons of MLB.  Teixeira played incredible defense, hit for power and average, and appeared to be entering his prime.  He started out his Yankee career in 2009 by struggling in April, igniting concerns that he may not be cut out for the pressures of playing New York.  Texeira surged with an incredible May in which he hit .330 and 13 home runs and never looked back in the regular season.  Teixeira  was an All-Star in 2009 and also earned a Golden Glove and a Silver Slugger while finishing 2nd in MVP voting to Minnesota Twins catcher Joe Mauer.  Teixeira hit .292 with 39 home runs and 122 RBI’s and a .383 OBP in 2009.

Teixeira largely disappeared in the postseason that year, hitting only .180 in the 2009 postseason and a pathetic .136 in the World Series, but the Yankees had accomplished their mission of a World Championship that Teixeira had played a huge part in obtaining with his regular season play.  At that point the signing of Texeira  seemed to be a steal for the Yankees with the best yet to come. 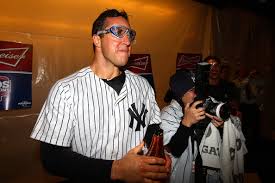 In 2010 Teixeira got off to another slow start but never really recovered. While Teixeira’s power numbers were good with 33 home runs and 108 RBI’s, his batting average crashed down to a career low .256 while his OBP dropped 20 plus points to .365.  His postseason performance was again disappointing in 2010.  Teixeira batted .148 in the 2010 postseason, including an 0-14 disaster in that year’s ALCS against the Rangers but was known to have been playing with a sore right wrist and a broken right pinkie toe that was suffered in an August 31st game against the Oakland A’s.

2011 was when concerns about Teixeira  became serious. Although his defense remained as stellar as ever, opposing teams readily employed a shift against Teixeira, exposing his inability to take the ball to the opposite field.  Whether it was the shift itself or simply the shift getting inside of his head, Teixeira responded to the shift with his usual power but also with a second consecutive lifetime low batting average.  Teixeira hit .248 to go along with yet another 20 plus point drop in his OBP, which crashed down to .341.  Teixeira’s frustration with the shift employed against him appeared to have altered his swing to an uppercut, causing him to hit more pop-ups and fly balls than usual.

Teixeira ended his 2011 season with yet another catastrophic postseason performance against the Tigers in the ALDS. Teixeira hit .167 with no home runs and 1 RBI, on a bases loaded walk. 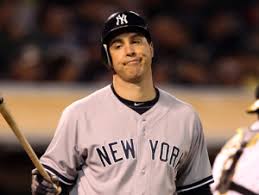 2012 was a bizarre season for Teixeira, filled with more struggles, illness, and injury.   After declaring to the media in 2012 spring training that he may resort to the bunt as a defense to the shift employed against him by opposing teams, Teixeira started April out by contracting a mysterious illness that caused him to have extreme coughing fits.  The cough was later found to have been caused by nerve damage to one of Teixeira’s vocal cords.

Teixeira continued to struggle against the shift in 2012 and never really got on track.  Teixeira batted .251 in 2012 with his OBP falling to .332 while playing a career low 123 games.  A calf strain in August through early September placed him on the DL, an injury he aggravated again in a controversial blown call against the Orioles in September in the midst of a heated division battle. 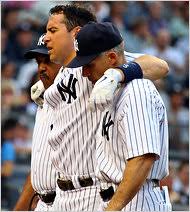 Texeira had an improved postseason in 2012, which isn’t saying much based on what he had done in his three prior postseasons as a Yankee.  Teixeira hit .281 in the 2012 postseason but again had no home runs and drove in only one run.

In this most recent offseason, Teixeira gave an interview to Dan Barbarisi of the Wall Street Journal in which he agreed with those who think he is overpaid.  Teixeira also stated that he felt his career was on the downside.

While some gave Teixeira kudos for being refreshingly honest, many others were offended by the defeat in Teixeira’s tone as well as his hurry to declare himself on a steep decline when he turns only 33 the day after opening day.  For a guy scheduled to make 23.5 million in 2013, he didn’t seem to be putting up much of a fight.

While hitting off of a tee practicing with Team USA for the World Baseball Classic two weeks ago, Teixeira felt pain in his wrist and left Team USA to return to the Yankees for an evaluation of his injury.

Initially called a “strained tendon” in his wrist that would sideline Teixeira for 8-10 weeks, the injury diagnosis was revealed this past weekend to be much more serious. Teixeira has a partially torn tendon sheath which has put his 2013 season in serious jeopardy.

Should the tendon itself become unstable due to the torn tendon sheath, Teixeira will require season ending surgery that is said to have a six month recovery period.

Teixeira’s contract has become a disaster second only to another Yankee, Alex Rodriguez.  Teixeira was indeed overpaid the last three seasons and now has the potential to earn 23.5 million dollars this year while not appearing in a single game.  As Alex Rodriguez may not play in 2013 either, the Yankees could have 50 million dollars in salary on the sidelines in 2013.

While Yankee fans are understandably upset after hearing about Teixeira’s far more dire diagnosis, it is important to keep in perspective that Teixeira himself doubted that he would ever be the player the Yankees paid for.  Teixeira classified himself as an aging player on the downside of his career and sadly, he was probably right even before he sustained his most recent injury.

Kevin Youkilis plays a very solid first base and scouts have given thumbs up across the board at the more compact swing Youkilis has unveiled this spring.   The drop-off at first base should not be large enough to cost the Yankees their season.

Mark Teixeira has been given a free pass by many for underperforming his contract the last three seasons as well as his embarassing postseason performances in large part because of his good looks that endear him to “fangirls” and his squeaky clean good guy image.  He’s also made appearances on” Entourage” and this past offseason appeared on Broadway in “Rock Of Ages”. None of that changes the fact that he simply isn’t valuable enough as a player to cost a team their season because of his absence and that Teixeira himself predicted a downward spiral for the rest of his career.

If the Yankees’ season is “over” because Mark Teixeira is injured, than the Yankees weren’t going to have much of a season anyway.  The Yankees can and will contend in the AL East whether Mark Teixeira comes back or not in 2013.