In exactly one week, the Yankees ultimate battle begins: the road to the Chase For 28. However, the changes and deductions have the Yankees in uncertainty.

I believe that the Yankees will overcome all of their injuries and end up back on top in the AL East. Last season it was uncertain when Brett Gardner and Mariano Rivera went down, but players stepped up and the Yankees were back on top. The same instance could happen this season with the Yankees.

So, where do you believe the Yankees will end up by the end of the 2013 season?

The next time you read me will be one week from today, exactly five minutes before the first pitch is thrown at Yankee Stadium.

It’s the time of year where we all do our best to do what many say can’t be done, which is to predict baseball.

Here is my 2013 forecast for the American League.

Don’t believe the hype were the words of wisdom once offered to us all by Flavor Flav.  With all due respect to Mr. Flav, I believe that the Toronto Blue Jays can and will justify the preseason hype surrounding them.

In 2012 the Blue Jays were devastated with injuries, primarily to pitchers,  and set a franchise record by using a total of 31 pitchers.  In addition to the pitching injuries of last year, star Jose Bautista missed much of the season with a wrist condition much like the one that Mark Teixeira recently suffered.

The Blue Jays front office moved boldly in the off season, acquiring pitchers Josh Johnson and Mark Buerhle, shortstop Jose Reyes, utility man Emilio Bonafacio, and catcher John Buck from the Miami Marlins.  The Jays weren’t done with moves yet though, as they then completed a trade with the Mets that spun Buck and some prospects in exchange for 2012 NL Cy Young Award winner R.A. Dickey.

With Edwin Encarcion emerging as a major weapon last year, Jose Bautista recovered from surgery to repair his wrist, young and exciting third baseman Brett Lawrie, Casey Janssen developing into a really good closer last year, and the new additions to the team, the Blue Jays are loaded with talented players.

The Blue Jays lineup will be a nightmare for opposing pitchers and the rotation extremely solid from top to bottom. The Blue Jays should romp to an easy win in the AL East.

The Yankees, Rays, and Orioles should all have their moments this season and will likely slug out a three way battle for the runner-up spot and a wildcard in the playoffs that I believe will end with the Rays finishing second and heading to the playoffs.

The Rays rotation of Price, Moore, Hellickson, Cobb, and Nieman is the best in the American League in my opinion. The Rays narrowly missed the playoffs last season despite the absence of their best player, Evan Longoria, for much of the season.  While still lacking hitting, a healthy Longoria , a better season from talented center fielder Desmond Jennings, and an upgrade at shortstop to Yunel Escobar should be enough to push the Rays back into the playoffs this year.

The Yankees and Orioles are contenders, but the Yankees will likely need to make trades much better than the pending Vernon Wells trade to make the playoffs and the Orioles can’t rely on matching their 2012 records in games decided by one run and extra inning games.

The Red Sox are rebuilding and should bring up the rear. 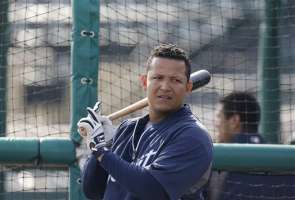 The Detroit Tigers once again look to be a cinch to win the AL Central and due to the poor competition in their division, should win more games than anyone else in the American League this year and get the #1 seed in the playoffs.

If the Tigers’ lineup wasn’t scary enough last year, Victor Martinez returns this season at the DH slot and Torii Hunter takes over right field for the Tigers.

While the bullpen may be an issue at times for the Tigers, the expected hitting and starting pitching should lessen the impact that the bullpen issues can have on the season.

The White Sox will be joined by the improved Indians and Royals in their pursuit of second place in the Central.  It’s a tough call for the minor awards in the Central but I’ll go with the White Sox narrowly over the Indians.  I don’t believe that anyone but the Tigers makes the postseason from the Central.

The Twins will continue their “rebuilding” with another tough year at the rear.

The Angels just keep adding players and I believe that the addition of Josh Hamilton will put them over the top and that they will win the AL West.

The Angels have a few concerns, mainly their starting pitching after ace Jered Weaver and Albert Pujols painful foot condition, and their bullpen,  but the addition of Hamilton gives them a murderers row unrivaled in MLB.

The Angels should slug their way to a division win over their arch-rival Texas Rangers, who are being written off a bit too soon.

While the Rangers did suffer a blow when Hamilton chose the Angels over them, they still possess a dangerous lineup.

The Rangers were deeply affected by injuries to their starting pitching last season and if Darvish, Harrison, Holland, Ogando, and Lewis can stay healthy the Rangers are capable of beating the Angels.

The Rangers should take second in the AL West and I project them to get the first wildcard position and advance to the postseason.

The A’s should have a solid season and the Mariners should be improved but I can’t see either challenging the top the two.

The Astros should suffer one of the most tragic seasons in the history of MLB, moving from arguably the softest division in baseball(the NL Central) to the AL West.  I think it is reasonable to expect them to lose between 110-120 games this season.

Manager of the Year- Jim Leyland

Rookie Of the Year- Jurickson Profar

Good morning all.   Let’s get going with the some links.

—  Bryan Hoch of MLB.com has some quotes about the Vernon Wells trade.

— Andy McCullough of The Star Ledger writes that the Yankees lineup lacks depth, talent of years past.