Could We All Be Wrong On Vernon Wells? 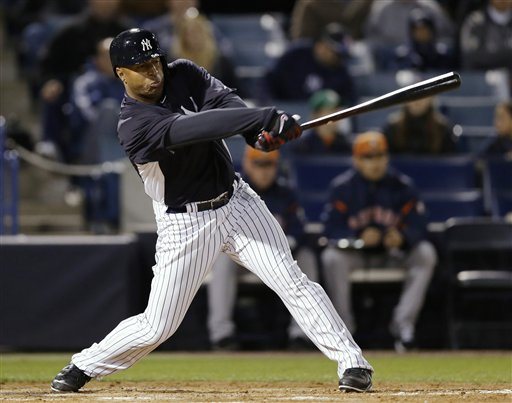 The overwhelming reaction to the Yankees’ acquisition of Vernon Wells was highly negative and with very good reason. When I first heard the reports that the Yankees were acquiring Wells, and were paying him $13 million over two seasons, I was floored. I thought that either the salary number was wrong or that the Yankees would be getting an useful piece in return. Alas, that was obviously not the case, but who knows there is a chance that Wells could work out for the Yankees.

The part of the trade that I was the most confused about was why would the Yankees sacrifice space on the 2014 $189 million budget for a guy that has been completely useless the last two seasons? However, that appears not to be the case, as the Yankees are paying the majority of the $13 million to Wells this year and may actually get a luxury tax credit worth as much as $2 million for 2014.

Part of the reason the Yankees say they were willing to pay Wells this much is because the WBC will be picking up a portion of Mark Teixeira’s contract this season due to his injury on Team USA. Now, I think they could have put those extra savings to better use, but we will see on that. What paying Wells this money does now is it brings up issues about why they didn’t pay certain players this offseason. There were tons of much better players than Wells that they could have given that money to this offseason, and using the Teixeira savings as an excuse as to why they didn’t is really insulting to everyone’s intelligence. The whole trade completely reeks of desperation.

However, Wells is here and the offseason is over, so there really is no point in looking back anymore. Despite me and the majority of Yankees fans hating this trade; could it possibly work out? Maybe. Like I said, the money effecting the 2014 budget doesn’t seem to be the issue that it looked like it was originally, so it will come down to what Wells does on the field.

Yankees scouts clearly saw something they liked about Wells this spring. Wells has changed his swing this spring, and has hit .333/.364.667/1.030 with four home runs in spring training. Mike Eder over at It’s About The Money, has a good piece on Wells’ swing changes, noting that he is standing farther off the plate this spring. Watching Wells last night, it seems like his bat speed was still there, as he hit two rockets that he got unlucky on and they were turned into outs.

The Yankees have had great success recently at taking players off the scrap heap and having them perform well. Some recent examples  include Ichiro, Raul Ibanez, Andruw Jones for a season, Bartolo Colon, Freddy Garcia, Cory Wade, Derek Lowe for a short time last year, Eric Chavez, Kerry Wood, and Marcus Thames.

Wells could surprise a lot of people and join that list this season. This trade will either make Cashman and his scouts look like geniuses or dopes. While, I for one would have never made this deal, it certainly is not impossible that Wells turns out to be an asset to the Yankees this season.