Week 2 Yankees Player of the Week 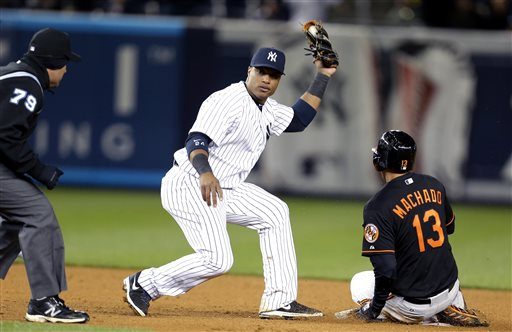 The Yankees had a very nice bounce back week, as they went 4-1 with two rain outs. It all started on Sunday, as Jayson Nix’ huge home run off of Justin Verlander  put the Yankees up 2-0 and it really got them going. Sabathia turned in a huge performance against Verlander and the Yankees went on to win 7-0, which really seemed to give them a lot of confidence. The Yankees went on to absolutely pound Cleveland, scoring 11 and 14 runs in the first two games, before having the next two rained out. Robinson Cano hit two home runs in the first game and Travis Hafner burned his old team with a three-run home run to put the Yankee out ahead 3-0. In the second game, the Yankees hit an incredible five home runs and 18 hits. After the rain outs, the Yankees came back to the Bronx and got a 5-2 win over the Orioles thanks to a dropped fly ball by Adam Jones that gave the Yankees three runs and broke a 2-2 tie. Yesterday, Phil Hughes was terrible and allowed three home runs in a 5-3 loss to Baltimore. The Week 2 Yankees Player of the Week Nominees are CC Sabathia, Robinson Cano, Kevin Youkilis and Vernon Wells.

CC Sabathia: Sabathia had two brilliant outings after his normal opening day disaster. On Sunday, he pitched seven shut out innings at Detroit without his best stuff. The Yankees needed that game desperately and came through like an ace should against perhaps the best pitcher in baseball. On Friday against Baltimore Sabathia was absolutely dominant. He pitched eight innings, allowed one earned run on eight hits and struck out nine. On a night when Buck Showalter said Miguel Gonzalez could not throw his breaking ball because of the frigid conditions, Sabathia dominated the Orioles with his slider and changeup. Sabathia’s fastball still sat in the low 90s this week, but if he locates with his off speed pitches like he did this week it will not matter. I’m sure once the weather heats up the velocity will as well.

Robinson Cano: Cano was an absolute beast this week. He hit .500, with 3 HR’s, 8 RBI and a 1.021 OPS. Cano hit two home runs in Cleveland on Monday to finally get his season rolling. He followed that up the next day with four hits, a home run and 5 RBI. Also, Cano has multi-hit games in each of the two games against Baltimore.

Kevin Youkilis- Youkilis is a nominee for a second week in a row, as he hit .350 on the week with 1 HR, 5 RBI and a 1.073 OPS. Youkilis had a hit in every game this week until yesterday’s 0-5 effort. He had 2 RBI in Sunday’s win at Detroit and had one of the five home runs in Tuesday’s win at Cleveland.

Vernon Wells- Wells is also a nominee for the second week in a row and he hit .368, with 1 home run, 1 RBI and a 1.118 OPS. Wells is still hitting the ball with great authority, as even his outs were loud. He went o-4 on Friday against Baltimore, but 3 of the outs were rockets and one of them was a rocket that Jones dropped. Wells had two hits yesterday, including a homer, and three hits on Monday in Cleveland.

Not much doubt this week as Robinson Cano takes home the honors as Yankees Player of the Week for week 2. On a nother week, Sabathia would have a great shot at winning but not with Cano this week. Discuss the week that was in the comments and vote for your player of the week in the poll.