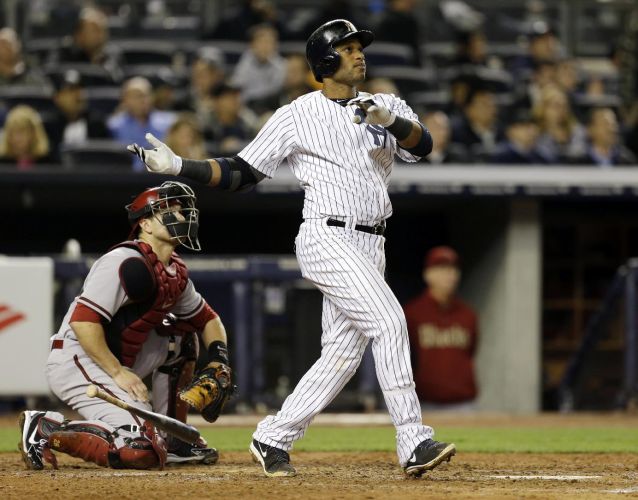 On a night where his idol Jackie Robinson was honored Robinson Cano proved yet again why players will eventually be looking up to him.  Cano hit a three- run home run in the fourth inning off Brandon McCarthy that gave the Yankees a 3-2 lead that they would never relinquish.

That at-bat proved that not only does Cano have all the physical tools in the world, but he has it mentally as well. With Cano on-deck, McCarthy struck out Brett Gardner on a 3-2 changeup and the same situation arose with Cano. He was looking changeup, McCarthy threw a terrible one that got the middle of the plate, and Cano hit an absolute rocket deep into the right-center bleachers. The 3-2 changeup that Cano hit out was the fourth consecutive changeup of the at-bat and he knew from Gardner’s at-bat to look for it again on 3-2.

With the injuries to Mark Texeira, Curtis Granderson, Alex Rodriguez and Derek Jeter, Cano was going to have to lead the Yankees through April and so far he has. Obviously, he has had help in the lineup from Kevin Youkilis, Vernon Wells and Travis Hafner among others, but the Yankees did not start winning until Cano got going. Youkilis, Wells and Hafner hit well when the Yankees were losing, but they are not capable of carrying a team like Cano is.

“When Robbie got going, we got it going as a team, manager Joe Girardi told George A. King III. “When he got hot our offense took off.”

Cano is now hitting .327 with 4 home runs, 9 RBI and a 1.042 OPS. His wOBA (.438) and his wRC+ (181) are also outstanding. The Yankees are 6-1 since Cano turned his season around in April and it is no coincidence. He has overcome his struggles from last postseason and early in the season to become the player we know him to be.

Why was he struggling? Well, ESPN’s Mark Simon wrote about how teams were pitching him. It was written back on April 5th,  but it is still relevant today.  At that point in the season Cano was 2-for-15, and teams were having success pitching him away. Of the 59 pitches he had seen to that point, 43 of them were either on the outer-third of the plate or off the plate away. That is a total of 73 percen,t and in the playoffs last season, Cano saw those pitches 66 percent of the time. Cano was 3-for-40 in the playoffs and 28 of those outs came off of pitches to that area.

Cano was getting to anxious trying to pull these outside pitches. The Red Sox even shifted him like they would for Mark Teixeira during the opening series off the season, which we had never seen before with Cano. He turned it around on April 8th in Cleveland, as he hit an opposite field homer and double and he has not looked back ever since. I cannot upload it here, but his heat map on ESPN shows that he is now handling the outside pitch better.  Also, Cano’s spray chart for this season clearly shows that he has hit the ball to all fields and he is going the other way at least just as much as he is pulling the ball.

The double edged sword of all of this is of course Cano is an impending free agent and the more he continues to hit like this the more his cost goes up. Hopefully with Cano leaving Scott Boras for Jay Z’s Roc Nation Sports the Yankees can work out an extension before the year is over. With Mariano Rivera retiring and Derek Jeter’s time dwindling down the Yankees will need a new face of the franchise and it appears Cano will be headed that way if he stays.