Going for the series win! Here we go!

— Here’s how you know Summer is about to begin: It’s time to vote for the 2013 All-Star Game. Choose your favorite players and hope they get in. Click here and you could vote 25 times. Voting ends July 4.

— This year you can also vote for three players in each league to participate in the Home Run Derby at Citi Field. Robinson Cano is one of the nominees for the American League, so make sure you vote for Robbie!

Yankees a Different Team vs. Lefties 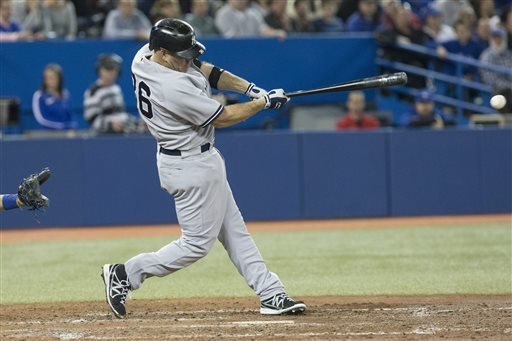 The Yankees did the little things to score enough runs to win last night against Tampa’s lefty ace David Price. Combine that with Phil Hughes’ strong performance, and that is how the Yankees will have to beat lefties until the reinforcements come. Eduardo Nunez went first to third that lead to a run in the fourth inning. Then,in the eighth inning, Ichiro went first to third on a hit-and-run single by Jayson Nix, which led to the Yankees tying the score at two. The Yankees had a similar win against tough Arizona lefty Wade Miley when Brett Gardner got a clutch two out hit to tie the game at three in the seventh inning. Manufacturing runs like that is how the Yankees are going to have to score against lefties.

The Yankees’ slash line against lefties this year is a paltry .190/.262/.299/.561 and against righties it is .301/.368/.533/.901. They have performed by far the best against righties in MLB and about the worst against lefties. This is a stark difference from Yankees teams of the past, as the Yankees have always had a balanced lineup that could hit lefties and righties equally. The Yankees always had a few switch hitters in their lineup and they have not had an at bat from a switch hitter all season. The last two days the lineup has looked exceptionally brutal with the likes of Ben Francisco batting second  and fifth and fifth Francico Cervelli batting fifth on Monday. Obviously the loss of Kevin Youkilis the last few days has hurt, even though he has not hit lefties this year. There is really not much Joe Girardi can do, as he has a very sorry hand to deal with against lefties.

Youkilis and Robinson Cano need to perform much better against lefties then they have been. Youkilis has been abysmal against them this year, as he has 1 hit in 19 Abs against them this year with a .142 wOBA. That is a very small sample size, and Youkilis does have a great .918 career OPS against lefties, so he should be able to turn it around. Cano had issues against lefties last season and they have carried over into this season. He did hit a home run against Matt Moore on Monday, so maybe that is a positive sign, but the Yankees really need him to get back being to the balanced hitter that he used to be.

This is an issue that could have been seen a mile away this offseason. It started when the Yankees signed Ichiro to create and all lefty starting outfield of Ichiro, Granderson and Gardner. Ichiro was abysmal against lefties in 2012, Gardner has never hit them consistently in his career and Granderson also struggled mightily against them in 2012. I believe that the Ichiro signing was an ownership move and not a Brian Cashman move, but either way it was a terrible one. What Cashman could have done is find a much better utility option than Jayson Nix and a much better righty DH than Ben Francisco. Obviously, Cashman did not expect to be without Derek Jeter for so long, but still Nix should have been upgraded on. Francisco provides no value at all and they should really cut bait with him now.

Right now there is really nobody Cashman can get outside of the organization, as nobody is willing to give away pieces yet, although he will have to by the trade deadline. Zolio Almonte (.263/.411/.404/.814) and David Adams (.317/.417/.463/.880) are both off to very good starts at Triple A and should be brought up to replace Nix and Francisco. Ronnier Mustelier is another option, but he has not played yet this year due to injury. Adams could play third and Almonte can DH or play the outfield. Nix has struck out an incredible 16 out of 43 at bats already, which is just dreadful for a non power hitter and obviously Francisco has done nothing.

It is a miracle that the Yankees have a 4-3 record this year against lefties with the lineup they are throwing out there, which is a testament to the grit and toughness they have shown this year. However, it will be hard to keep up that pace with the current hitters they have in the lineup, so either they will need to improve, which is doubtful, or go in a different direction and call up some reinforcements.