Here are some notes from today:

— David Robertson: David Robertson looked as if he turned on his ankle during the last pitch of his outing and immediately went to the clubhouse. According to Girardi, Robertson is fine after icing his ankle and he should be ready to go on Friday.

— Chris Nelson: After the game, the Yankees announced that they traded either cash or a player to be named later to the Colorado Rockies for INF Chris Nelson. Nelson is batting .242 (16-for-66) with 0 HR and 4 RBI’s with his time in Colorado. The Yankees have not made a 25-man roster move but they did move Francisco Cervelli to the 60-Day-DL.

— Mark Teixeira: Mark Teixeira is one step closer to returning to the Yankees lineup. Texieria hit balls off a tee and hit baseballs that were thrown by the coaches towards him. He’s not close to getting into a rehab game and he’ll continue to build strength in his wrist.

It’s the series finale for the Yankees and Astros before an off-day tomorrow. Here’s your lineup!

— Brett Gardner is out of the lineup again. As of right now, we’re speculating it’s a day-off but it’s a little odd. He just had a day-off on Sunday. I thought Gardner had enough offense to play against LHP. Gardner’s a better option than Ben Francisco, you know. 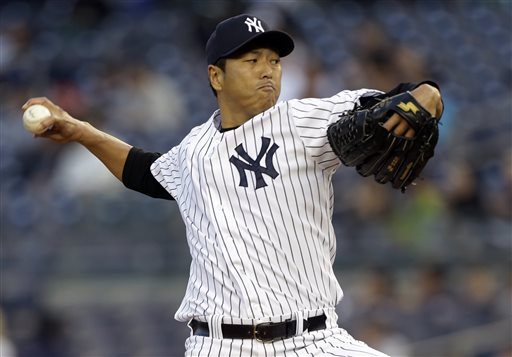 Going into the season, the goal for the Yankees in April was to just tread water and not fall completely out of the race with all the injuries they had. The Yankees not only survived April, but they thrived in April. After yesterdays 7-4 win over Houston, the Yankees ended April at 16-10 and only two games behind Boston in the AL East. That 16-10 record incredibly puts the Yankees on a pace to win over 100 games this season. The Yankees had many unexpected players step up for them in the month.

The Yankees are tied for first in the AL with 36 home runs on the season, when nobody expected them to hit as many home runs as they did last year. However, the Yankees are not only scoring most of their runs off of home runs this year like they did last year. The Yankees have a more diverse offense so far this season and have made many comebacks that they did not seem to make last season. In seven of their last 10 wins the Yankees had been trailing at some point in the game. All four of their wins in a four game sweep of Toronto were come from behind wins. Also, they had an exciting comeback against David Price and Fernando Rodney in Tampa and in their two wins over Arizona.

Robinson Cano, Travis Hafner, Vernon Wells and the pitching staff have helped carry the Yankees to this 16-10 record. Cano was going to have to be one of the players to carry the Yankees and he has performed at an MVP level. Without much protection in the lineup, Cano has hit .327, with 7 HR’s, 17 RBI and a .977 OPS. Also, he has .413 w/OBA and a 161 wRC+ that would both be career highs for him. Hafner has been incredible and seems to get a big hit whenever he has a chance too. Especially lately, he had three hits and three RBI in yesterdays win and on Saturday Hafner hit a huge game tying home run. For the season, Hafner is hitting .318 with 6 HR’s, 17 RBI, a 1.104 OPS, a .460 wOBA and a 192 wRC+. Wells has been on of the few consistent Yankees right handed hitters, and who knows where they would be without him either. His approach at the plate has been excellent, as he has been using the opposite field more and taking a lot of walks.

The big three of the Yankees rotation has been about what you would expect it to be and winning when Sabathia, Kuroda and Pettitte were  pitching was essential in April. Kuroda has been the best of the three, as he is 4-1 with a 2.25 ERA and a 1.06 WHIP. Opposing hitters are only hitting .206 off of him and Kuroda’s 52.4% GB percentage has been the key to his success. He is one of Brian Cashman’s best free agent signings ever. All the talk about Sabathia has been how his fastball is only averaging 89.8 MPH, but you can hardly tell that by looking at his results. He is 4-2 with a 3.35 ERA and he has been giving the Yankees great length no matter what his stuff is. His changeup (21.90% whiff %) and slider (14.20% whiff %) have been outstanding. Pettitte’s numbers are skewed by his disastrous start on Monday, but he has thrown quality starts in four of his five outings and has been just as good as he was last year for the Yankees.

Incredibly, the Yankees did not get any healthier in April and in fact they had to endure even more injuries. Youkilis had to leave the game on April 20th at Toronto with a back injury and has only played one game since and is now on the DL. Francisco Cervelli broke his hand after filling in so well for Russell Martin and is expected to miss six weeks. So, without those two players, the lineup is even shorter these days. Jayson Nix, who is awful, had to bat sixth yesterday. The Yankees will have to survive about two more weeks before Youkilis and Curtis Granderson may return. The teams coming up on the schedule over the next two weeks are Oakland, Colorado, Kansas City, Cleveland Seattle, and Toronto, which is certainly not a murders row of teams. The Yankees made it through April and now they have to make it just a few more weeks before the reinforcements should be ready.