Hughes On the Rise 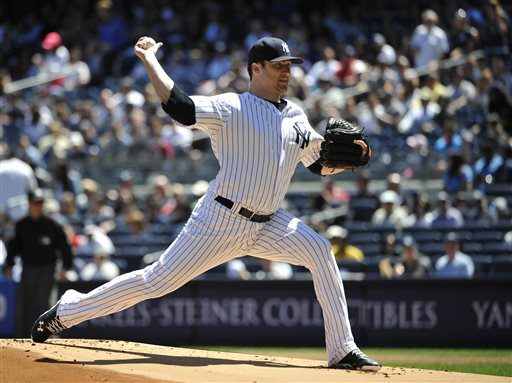 Phil Hughes takes a lot of grief from Yankees fans for not living up to the ace that he was hyped up to be. Most of this grief has been unearned because just because Hughes is not Matt Harvey or Stephen Strasburg does not mean he is not a solid pitcher. The calls for him to be taken out of the rotation whenever he struggles are mind boggling. Right now, only Hiroki Kuroda is pitching better than him on the Yankees, and Hughes has demonstrated the best stuff on the team.

Hughes was the reason the Yankees didn’t get swept this weekend, as he turned in a masterful eight innings against Oakland and allowed only one run. The Yankees needed all eight innings out of Hughes as well because the bullpen would have likely blown the lead without Joba Chamberlain and David Robertson. His fastball was absolutely dominant, as he seemingly got ahead 0-1 to every Oakland hitter. Out of Hughes’ 118 pitches, 79 of them were fastballs, 60 of them were thrown for strikes and he got 12 swings and misses out of his fastball. Also, his fastball had the velocity on it that we had not seen from Hughes for awhile now, as he topped out at 95 MPH without losing control. With Hughes’ short arm delivery, his fastball gets on hitters very quickly, so it appears even faster than that.

Hughes’ two main problems over his career have been his inability to put batters away and allowing too many home runs. His HR/FB rate is 9.6% this season compared to 12.4% last season, so he has improved there. For the season, Hughes’ foul ball rate on his fastball is still 26.17%, which is still too high. However, with 18 strikeouts over his last two outings, he is starting to show improvement there as well.

Part of the reason for the added strikeouts has been the development of Hughes’ slider. He implemented it around the middle of last season when he started to have success and it has really taken off this season. Hughes has thrown his slider 20.7& of the time this season compared to just 4.2% last season. His slider has a whiff percentage of 14.75% this season. It has replaced his curveball as his number one off speed pitch, which is good because Hughes’ curveball just was not effective enough to be an out pitch, but it is much better served to be his third pitch. Also, he has completely scrapped his cutter, which was an awful pitch for him, as it had a higher line drive percentage (6.67%) than whiff percentage (5%) last season.  He has four solid pitches to get people out and he can control of all of them, as his outstanding 8.74 K/9 and 1.80 BB/9 this season.

Hughes is in a contract season and if he keeps this up he will be in line for a very big deal. He should get around the five-year deal worth $77.5 million that Anibal Sanchez received from the Tigers. Hughes would be even more valuable to a team with a big ballpark, as more of his fly balls would not turn into home runs. It has been assumed that Hughes will be out of the Yankees’ price range due to the $189 million budget. However, with CC Sabathia being the only pitcher you can count on being under contract next season, the Yankees will have a big hole in the rotation. With talk of the Yankees maybe going away from that budget, perhaps there is more of a chance Hughes returns. If Hughes does leave as a free agent, fans will miss him more than they think, and maybe they will finally appreciate him.