— Travis Hafner‘s MRI revealed he has tendinitis. He’s icing his shoulder today and hopes to be in the lineup tomorrow night.

— Chris Nelson‘s name is no longer on the roster–and David Adams’s name replaced his. My hunch is telling me Nelson is the roster move. 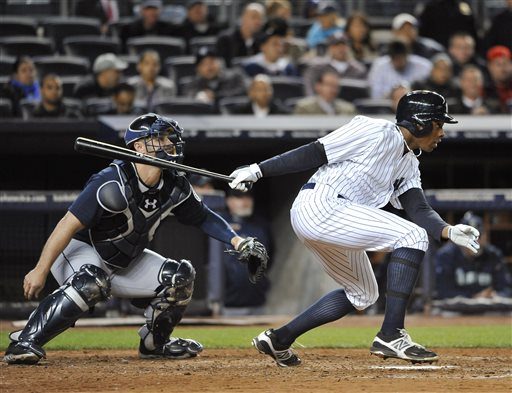 Yesterday was basically the whole season for the New York Yankees in a nutshell. They finally got Curtis Granderson back from the disabled list, but lost Travis Hafner due to a sore shoulder. So, they did not gain a whole lot there. Then, they were down 3-0 to King Felix and the Mariners, before clutch hits by Robinsonn Cano and Travsi Hafner got them a 4-3 lead that Mariano Rivera saved in the ninth inning. This formula has gotten them the most wins (25) in MLB and the best overall record (25-14) in the AL. They have never gotten healthy this year, but their pitching has been outstanding, and they have managed to hit just enough.

There was great anticipation yesterday as to where Granderson would bat in the lineup and who among Brett Gardner, Ichiro Suzuki and Vernon Wells would sit. With Hafner hurt that got delayed a few days, but it is still definitely worth pondering.

It seems pretty obvious that with Granderson returning Suzuki’s playing time should be cut dramatically. Wells has earned the right to play every day and Gardner’s defense is very valuable in centerfield, although I am still not a big fan of his at the plate. Suzuki has been terrible at the plate this year, as he has hit .246/.289/.341/.630 (63 wRC+) in 137 at bats. For comparisons sake, Chris Stewart had a 65 wRC+ last season, so Suzuki is hitting at a backup catcher’s level in right field this season.

This is not terribly surprising, as Suzuki has been in a steep decline for many years now. Even in his prime Suzuki never took walks for hit for power, so if he is not hitting at least .280 he provides little offensive value. The Yankee’s upper hierarchy signed him to a two-year contract most likely because they wanted the added revenue if Suzuki reached 3,000 hits in a Yankees uniform. Hopefully, nonsense like that, and Suzuki’s stature as a Hall of Fame player, does not stop Joe Girardi from putting him in his rightful place on the bench and as the team’s fourth outfielder.

Last night, Girardi chose to leave Cano 2nd and bat Granderson 4th. It is unconventional to hit your best player second, but lone behold Cano was up with the game on the line in the seventh inning. Now, that you could obviously write that off as just a coincidence, but getting Cano the most plate appearances possible is not the worst thing in the world. Ideally I would like Granderson 2nd and Cano 3rd because Granderson is a great fastball hitter and he would see tons of them hitting in front of Cano. However, the problem with that is with Gardner leading off you have three lefties in a row at the top of the lineup, so you can see why this is a very tough lineup to juggle.

With David Adams potentially coming up today you have three guys for two spots in Adams, Chris Nelson and Jayson Nix if Ben Francisco gets cut rather than Nelson. With the way Adams is hitting at Triple A (.316/.407/.490/.897) he deserves a chance to start at third base everyday, which leaves Nelson and Nix to battle it out at shortstop. There really is not big difference between the two. but I think Nelson brings a little more to the table than Nix. Nelson is hitting .296 over his last seven games for the Yankees and adds a lot more speed than Nix. Nix has struck out way to many times for a non-power hitter and only has .626 OPS this season. I am not saying Nelson is a whole lot better, but I would rather see him play

So, here are what my lineups would be, assuming Hafner is healthy.

I put Ichiro in against lefties because his platoon splits are actually a lot better vs. lefties this season and more because the Yankees really don’t have anybody else. Getting Youkilis back against lefties would be a big helps.  What would your Yankees lineup be? Discuss it in the comments.