Week 7 Yankees Player of the Week 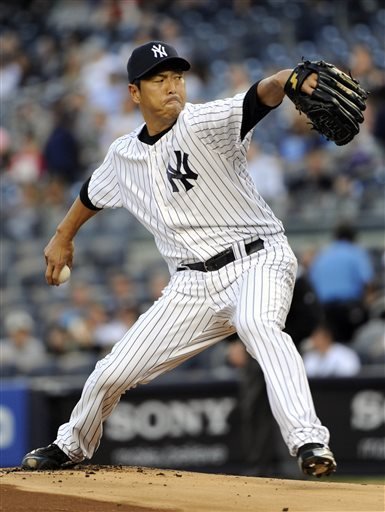 The Yankees had another successful week going 5-3 against Kansas City, Cleveland, Seattle and Toronto. The week started out on the road as the Yankees completed a sweep against Kansas City on Sunday behind home runs from Robinson Cano and Vernon Wells and a solid outing from Hiroki Kuroda. The Yankees went on to split a doubleheader in Clevealnd after getting shutout but turned the table in the second game by shutting out Cleveand in Vidal Nuno’s first MLB start. On Tuesday, the Yankees had a huge come from behind win after training Seattle 3-0. In the seventh inning, Cano hit an RBI double that tied the game at and the Yankees went ahead on Lyle Overbay’s sac fly. However, the Yankees lost the next two against Seattle, including an embarrassing 12-2 loss on Wedesday, in which Phil Hughes allowed seven runs and did not make it out of the first inning. Fortunately, the Yankees got to beat up on Toronto two more times this year. Kuroda pitched a gem on Friday when he went eight inning without allowing a run in a 5-0 win. Yesterday, Cano pounded Brandon Morrow with two home runs in a 7-2 rout. This week’s nominees for Yankees Player of the Week are Robinson Cano, Hiroki Kuroda and Vernon Wells.

Robinson Cano- Cano hit .250 for the week with 3 HR’s and 10 RBI. His game tying RBI double in the seventh inning on Wednesday was one of the biggest hits for the Yankees this season. Also, Cano’s two home runs yesterday were obviously huge in the Yankees winning that game as well.

Hiroki Kuroda-  Kuroda was absolutely fantastic in his two starts this week. On Sunday, he pitched 7.2 innings, allowed two runs on six hits and struck out one in Kansas City. He was even better yesterday, as he pitched eight shutout innings and allowed only two hits. Kuroda lowered his ERA to 1.99 for the season.

Vernon Wells- Wells hit .308 on the week with 2 HR’s and 5 RBI. His best game was on Sunday in Kansas City when he had three hits, including a two-run home run.

With his two outstanding starts Hiroki Kuroda is your Week 7 Yankees Player of the Week. With today’s rain out, discuss the solid week that the Yankees had in the comments. It was a fun week because we got to see a lot of new young players come up and perform as well as the regulars.