Oh how good it feels to play a game with American League rules. Here is your lineup as the Yankees attempt to break a three game losing streak  in their home ballpark. 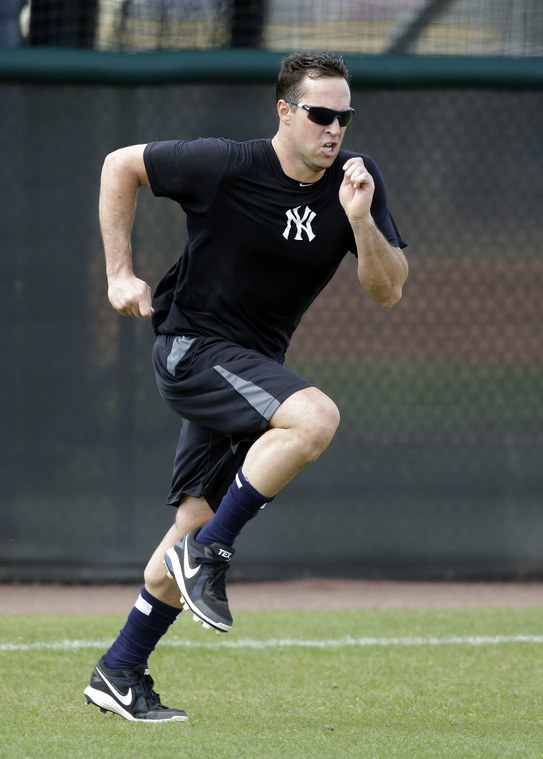 Mark Teixeira and Kevin Youkilis began their rehab assigment in Double A Trenton this morning and it could not come at a better time for the Yankees. When the Yankees were playing great baseball behind great pitching and newcomers like Vernon Wells, Travis Hafner, and Lyle Overbay getting the job done, many Yankees fans were saying how they did not want veterans like Mark Texiera, Kevin Youkilis, Curtis Granderson and Alex Rodriguez to come back.  That was an insane notion then and it is proving true right now.

The Yankees are now 6-7 in their last 13 games and have scored four or fewer runs in nine of those 13 games, including less than two runs in five of those games. The Yankees have averaged a pitiful 3.7 runs per game in May. You can only ask your starters to pitch great under those circumstances for so long and expect your bullpen to hold every one run lead you give them. Obviously, over the last two games David Robertson and Mariano Rivera each blew a game, but those losses were on the offense for only scoring a combined two runs in those games.

It  is obvious that Teixeira and Youkilis are needed. However, as Mike Axisa of River Ave Blues points out, they are coming back at postions where the Yankees have gotten good production. Lyle Overbay and David Adams have held up very well at first and third base. Texiera and Youkilis will be upgrades over them, but their real issues are at shortstop, catcher, and the outfield.

However, they will not be getting reinforcements at those positions anytime soon. Curtis Granderson will be inactive for at least four weeks and will probably take about two more weeks to rehab. Derek Jeter is nowhere near returning and Francisco Cervelli just got the pins out of his hand and has not started to rehab yet. The Yankees made their own bed at these positions in the offseason, as they willing let Russell Martin and Nick Swisher go and did not adequately replace them. Also, they did nothing to upgrade at utility infielder when they knew Jeter was an injury question mark.

The Yankees have a tough roster conundrum with Teixeira and Youkilis coming back. The Yankees are short on outfielders and it will be hard to carry Overbay and Hafner, since between them both they can only play one position. Ivan Nova will probably be the pitcher out of the bullpen sent to Triple A, but who goes with him is the question. The options are to send Brennan Boesch or Adams to Triple A or DFA Overbay. Sending Adams down would be the easy call, since you can always bring him back up, but he would be the best option as a DH against righties at the moment. Boesch is easily the worst player out of the three, but if you send him down than Jayson Nix is your fourth outfielder. You can probably get by like that for a little while, but long term having Nix as your fourth outfielder will not work. That is why Overbay may not be on this team for much longer.

This is not meant to discredit Overbay at all, as he has filled in better than anybody could have hoped for, but people need to pump the brakes on him a little bit. He is only hitting .251/.295/.468/.763, which is not great for a first baseman. Teixeira at his worst does much better than that. Overbay has been a great clutch player for the Yankees this season, but you cannot rely on that to continue. Good “clutch” hitting is more statistical randomness than anything sustainable because it is not really a skill.

For people who say Teixeira isn’t clutch he hit .390/.466/.932/1.398 in late and close games last year, .289/.360./.578/938 in high leverage situations and .285/.370/.646/1.016 in innings 7-9, so that is just a narrative and a fallacy that he doesn’t get any big hits. Unfortunately, if Teixeira starts out slow he will hear about it, but that is just silliness, as Overbay is nowhere near the player Teixeira is and there is a reason he was released by Boston three days before the end of spring training. Once Teixeira proves he is healthy there is not really room for Overbay on the team anymore. Obviously, that is not fair to him, but unfortunately it’s the business and the reality of the situation.  Overbay would be a great option to pinch hit late in games for the catcher, shortstop or Ichiro, but again can you really afford to have Nix as your fourth outfielder for six weeks?

I am really excited to get Teixeira and Youkilis back. It has been frustrating watching bad hitters take bad at bats lately. Unfortunately, like I said before you will still have three terrible hitters batting seventh, eighth and ninth but at least the middle of the order will be more intimidating.  People telling themselves that the Yankees are better off without the veterans hopefullt have seen over the last few weeks why they are dead wrong. What do you guys think should happen when Teixeira and Youkilis come back? What would your roster moves be?