It’s Game 2 of this three game set with Andy Pettitte facing Justin Grimm! Should be a good match-up. Here is the lineup for the Yankees.

— Well, we have some bad news on the Mark Teixeira front. According to the Yankees, the team doctors said that the tendon sheath in his wrist hadn’t completely healed and they’ve recommended surgery for Tex. It now appears 2013 is out of the question for the Yankees first baseman.

— Eduardo Nunez will play in a rehab game today with the Tampa Yankees.

— Rafael De Paula will represent the New York Yankees in the Futures Game on July 14th. Should be a great game to see the future stars of baseball. 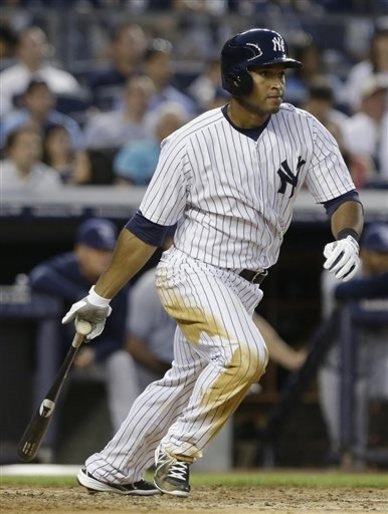 The Yankees outfield has been a mess for most of the season. Outside of Brett Gardner and a hot start from Vernon Wells, they have gotten little production from their outfielders. However, recently, Zoilo Almonte and Ichiro Suzuki have been very productive, and if they can keep on playing well the outfield situation will look a lot better.

In only 18 at-bats, Almonte has hit .438, with a home run and 4 RBI. He has provided a spark to the team like few players have for the Yankees so far this season. Obviously, the sample size is extremely small, but Almonte has shown he has some skills to work with. It has not only been his skills, but his approach at the plate that has been impressive, as Almonte has not looked over matched by MLB pitching so far. Almonte hit .297/.369/.421/.789 in Triple-A before he got called up.

Almonte is not considered to be one of the Yankees’ best prospects, but then again neither were Gardner or Robinson Cano, so you just never know. The Yankees are in desperate need of a young breakout player, so they will give Almonte every opportunity to do that. They could really use young and cheap players not only for this season, but next year when they try to get under $189 million in payroll.

If Almonte and Ichiro can keep up their hot streaks, the Yankees might look more at infield help at the trade deadline. That is not to say that if a good deal for an outfielder comes along the Yankees shouldn’t jump on it because they need bats at any position they can get them. However, the infield seems to be in worse shape than the outfield at this point.

David Adams and Jayson Nix may just be the left side of the infield combo in all of MLB at this point. After a hot start to his Yankees career, Adams looks absolutely lost at the plate right now. He has hit .105/.171/.105/.276 in the month of June, which is pretty much as bad as a player can possible be at the plate. Despite the love Joe Girardi has given Nix at times he is not a MLB caliber starting shortstop. His .280 wOBA, 71 wRC+, and .066 ISO are just not good enough.

The Yankees are also getting horrible production out of first base and catcher. Despite the perception of how good he has been this year, Lyle Overbay really is not very good. Yes, he has had some key hits and has been better than expected, but that is still not saying much. Overbay’s .232 avg, .289 OBP, 90 wRC+ and .1 WAR are just not very impressive.

Like their left side of the infield combination, the Yankees’ catching combination is also in the running for the worst combo in MLB. Chris Stewart is nothing more than a backup catcher and Austin Romine is nothing more than a Triple-A catcher right now. This is the bed the Yankees made when they refused to pony up money for Russell Martin or A.J. Pierzynski. Hopefully, Francisco Cervelli is on his way back soon.

Despite all of this, the Yankees are still only one game behind the Red Sox in the loss column in the AL East. They still have great pitching and with some offensive reinforcements coming back and some potential trades the Yankees can still win the division.

With a little more than a month to go until the trade deadline a lot of the potential trade targets are still just speculation. However, with Ichiro and Almonte playing well and Curtis Granderson returning the Yankees may need infielders more than outfielders. Ideally, the Yankees could trade for a versatile players like Chase Headley, Mike Morse, or Corey Hart who could play both. The trade deadline season is just beginning and it will be a very interesting time for the Yankees.

The Yankees beat the Rangers last night 4-3 on a walkoff homer by Ichiro Suzuki off of Texas reliever Tanner Scheppers with two outs in the bottom of the ninth.

All four of the runs scored by the Yankees were the result of solo homers.  Travis Hafner, Jayson Nix, and Brett Gardner were the other Yankees besides Suzuki to go deep, all of them homering off of Rangers ace Yu Darvish.

Hiroki Kuroda was a little shaky, allowing two home runs, but pitched well enough to keep the Yankees in the game.

Patrick Rishe of Forbes has this great article on Cashman’s disappointment with A-Rod.

Steve Politi of the Star-Ledger says Michael Pineda could be a difference maker for the Yankees.

Have a great day everyone!!!