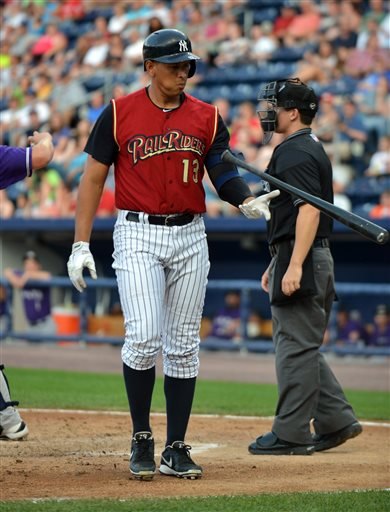 Dr. Michael Gross, the personal doctor for Alex Rodriguez, went on with Mike Francesa of WFAN 660 and said that he saw nothing wrong with Rodriguez’s quad on the MRI.

Rodriguez clearly tried to force the Yankees’ hand because he believes that they are doing everything in their power to keep him from playing. He went against the wishes of the Yankees to get a second opinion from Dr. Gross against their wishes to put the ball back in their court.  Rodriguez is trying to prove that he wants to play and any reports of him wanting to retire before MLB can suspend him ans cash out are false.

Right now the Yankees are looking very bad in this. Their reaction to Rodriguez being ready to play should be joy considering the trash they have had playing third base this year. However, their have been reports that the Yankees are looking to discipline him for getting a second opinion against their wishes. It should be about putting the best players on the field, but right now that does not seem to be the first priority.

Here is the audio of Dr. Gross with Francesa courtesy of @WFANAUDIO. This seems to be only the beginning of this.

Posted on July 24, 2013, in No Category. Bookmark the permalink. Leave a comment.