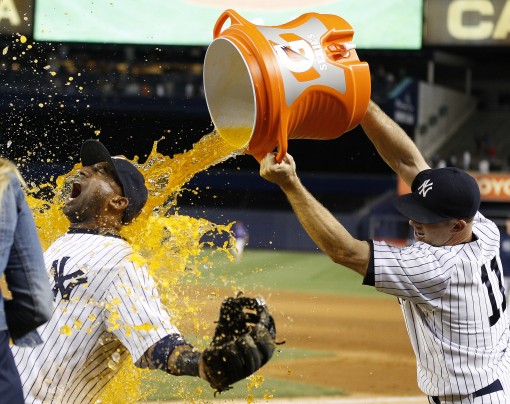 Despite going up against arguably the best pitcher in baseball in White Sox ace Chris Sale, it still would’ve been a disappointment had the Yankees lost last night. There’s no need to explain that the team has to go on a 2011 Cardinals-esque run to even have a shot at the playoffs in a few weeks, so any loss against a lesser team is simply unacceptable.

Unfortunately, it looked like the Yanks had accepted their fate in last night’s game, as Sale had gone out and completely dominated the lineup. If it weren’t for yet another defensive miscue by Chicago that allowed Vernon Wells to steal home in the 2nd inning, the 24-year old lefty would’ve been working on a shutout as  he started the 8th inning after allowing just three hits.

After recording an out, Sale surrendered a single to Derek Jeter and a double to Robinson Cano that put runners on second and third. Manager Robin Ventura elected to bring in Nate Jones to face Alfonso Soriano with Chicago’s  4-1 lead still in-tact.

But, it probably shocked no one who was on the field when Soriano poked a single into center field, scoring Jeter and Cano to make it a 4-3 game. Even on nights when he may not have his A-game, Sori just keeps on producing and coming through in the clutch. It’s pretty remarkable.

Anyway, Jones stayed in there to face Alex Rodriguez who singled to center as well, putting runners at the corners. As Joe Girardi went to his bench and pinch-hit Curtis Granderson for Vernon Wells, Ventura did some match-making of his own by bringing in Donnie Veal.

Yet, it was Joe who won this battle of the skippers as Grandy picked up the Yankees’ fifth straight hit of the inning with an RBI single. The game was now tied up at 4, and fans who were watching could swear a DeLorean picked them up and brought them back to 2009. It was that magical of a comeback, and the best part was that it was far from over.

Mark Reynolds struck out, but Ventura again went to the bullpen, bringing in Matt Lindstrom. Although it really didn’t matter who was on the mound, because the momentum had shifted completely. People knew that the Yanks were going to find a way to get it done no matter what.

So when Eduardo Nunez laced a two-run double down the left field line, the Yankees had a 6-4 lead and it was time to “put it on the left side”, as Michael Kay once said. In came Mariano Rivera and in a matter of minutes the ballgame was over, as Mo racked up his 40th save of the season.

While the Yanks may not have gained any ground as the Rays defeated the Angels, they luckily did not lose any. The team was well on its way to a well-deserved loss through the first 7 1/2 innings, but luckily they found a way to claw back in what may turn out to be their best game of the season.

But as is the case during a playoff chase like this, last night’s likely Yankee Classic is exactly that – in the past – and the Yanks have to focus on winning TODAY. It’ll be our former ace CC Sabathia going up against right-hander Erik Johnson, who is making his Major League debut. Game time is 7:05pm, and it’s can’t-miss television, folks. Now is the time to be fully invested in this Yankee team. It’s got talent, it’s got heart, it’s got pride, and it’s got the mentality Mariano Duncan and the 1996 world championship team had – that “We play today, we win today, das it!”