In a cruel twist of fate, the Yankees will need A-Rod the most 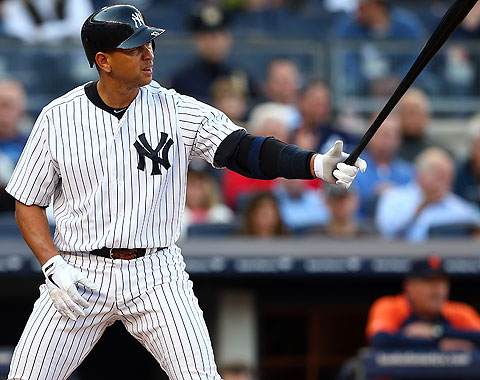 Two weeks ago, it appeared that the Alex Rodriguez era in New York was coming to a crashing conclusion. MLB had announced they are seeking to suspend him and about twenty other ballplayers for having connections to Anthony Bosch, the PED supplier from the Biogenesis clinic in Miami.

Many Yankees fans reacted with pure joy, believing that A-Rod and his mess of a contract could finally be shed by the team. With him taking only baby steps in his long road back from a second hip surgery, the looming 100-game suspension almost certainly would ensure that 2013 would be a year without the 37-year old has-been slugger.

As the Yanks had just gotten Mark Teixeira and Kevin Youkilis back off of the disabled list, there was little doubt that the team wouldn’t continue its surprisingly hot start to the season. Yet, just returning home after losing six out of ten games on the West Coast, the Bombers have hit a low point. The offense can barely score more than two runs a game, and the pitching has been average at best.

Adding injury to insult, Tex and Youk were both placed back on the disabled list with the same injuries that had them land on it in the first place. Inflammation in the right wrist for Mark, and a herniated disc for Kevin, one that was just operated on and will take 10-12 weeks at the minimum to heal.

If it explains their anemic performance since first returning from the DL, so be it. But the fact remains that the disabled list has once again inflated back to including all of the potent Yankee hitters not named Robinson Cano. With Youkilis almost certainly done for the year, and the constant threat of Teixeira suffering the same fate, it is not looking promising for the lineup to get any better any time soon.

That is, until A-Rod comes back.

You read that right. As far as the public knows, the only evidence MLB has been able to sniff out of Biogenesis is the journal of names and drugs Bosch allegedly kept for keeping tabs on all his clients. If I were a betting man, the investigation could go on well into the winter. Meaning (when he is physically ready), A-Rod can come back and be re-inserted as the team’s everyday third baseman.

It sounds ridiculous and trust me it’s not something I want to see happen. I am just like the common fan who would forever love Brian Cashman if he was able to get #13 out of the Bronx somehow. But, putting all the baggage Rodriguez brings with him aside, the Yankees need offense in the worst way possible. The trade market looks incredibly thin for impact bats, and the Yankees probably don’t have the pieces to acquire one even if they tried to.

So if I’m the Yankees and I can count on A-Rod hitting .280, driving in runs, and having the occasional power to hit one out, why the hell wouldn’t he be welcomed back? The fact is, no one knows if Curtis Granderson will still have enough pop in his broken hands to be the main power source of the lineup, or if Derek Jeter’s cranky ankle will hold up for him to be a reliable top-of-the-order hitter for the stretch run.

At this point in the year, as the lineup looks as bad as its been in decades, Alex Rodriguez may be the last hope for the Yankees to have a shot at competing for a playoff spot. The Red Sox, Orioles, and Rays are not going away anytime soon, and they have the younger, more athletic, and overall healthier ball-clubs.

Counting on Lyle Overbay, Vernon Wells, and Travis Hafner to be a potent middle-of-the-order bunch come the dog days of summer and the tense moments of a pennant race is not the way to go. As lost as the season once seemed for the Yankees’ oldest, most banged-up stars, it may be up to the Captain, and more importantly A-Rod alone, to keep Yankee Stadium’s lights glowing for the month of October.

As crazy as it sounds, it may be the only rational route to another Yankee playoff berth.

Rodriguez hits an all time low as he faces suspension

Alex Rodriguez isn’t the most popular choice for a Yankees fan. Heck, who could blame them? A-Rod’s career isn’t as glorious as half the women that he publicly has dated over the years. When the Yankees signed A-Rod, they knew what they were bargaining for. Rodriguez publicly revealed that he used steroids during his years with the Texas Rangers, causing Yankees fans to become uncertain with their newest 3B addition. Rodriguez has done some good for the Yankees; he helped win the World Series for the Yankees in 2009 (though most of the World Series heroics came from Hideki Matsui) but some good came with a price for the Yankees. A-Rod has struggled in the postseason every year aside from 2009, he’s been riddled with injuries and his antics on the field have caused uproars (going back to last postseason when A-Rod asked for a female fans phone number on a baseball). However, what could possibly come next for A-Rod overshadows the good and the upsetting things that he’s done in the past.

In Spring Training, there were reports that Alex Rodriguez was tied to the Biogensis reports, reports that said high profile ball players received illegal substances from a Miami clinic. Other names were mentioned such as Robinson Cano (who I’ve been told is not going to be suspended since his spokeswoman was the one tied, not him), Francisco Cervelli (who is in danger of being suspended 50-games), Ryan Braun (who on a technicality had his ruling overturned after he was suspected of using steroids during the offseason), Melky Cabrera (who already faced a suspension last season), Nelson Cruz and so many others. MLB agreed to look into the reports, leaving fans to wonder what could happen to some of these players.

Yesterday, MLB announced that they were planning on suspending players such as A-Rod, Ryan Braun and about 20 other players that were tied to the Biogensis reports. Rodriguez and Braun would face 100-game suspensions since they had used illegal substances in the past. With 20+ names on the Biogensis reports, why does A-Rod’s stick out like a sore thumb? Because of his 10-year contract with the New York Yankees that makes him one of the highest paid players in baseball.

If Rodriguez is proven guilty and MLB suspends him, this would be the ultimate all-time-low for A-R0d, tainting his career to the point of no return, and making him a disgrace to baseball. It’s easy for us to automatically assume that A-Rod is guilty given his past, but A-Rod’s fate could lie in the hands of the Biogensis reports and Major League Baseball.

I took to Twitter yesterday during the Yankees game, asking fans that if A-Rod was suspended if it would be the end to his career in Yankees pinstripes. Here’s what some tweeters had to say:

@dfiregirl4 No. They owe him 130+ mil for the next 4 seasons. He isn’t retiring. They are stuck with him.

@dfiregirl4 I could only hope, but he is under contract…They wouldnt be able to dump him.

@dfiregirl4#Yankees I hope so .. this is embarrassing and I don’t care if we eat his contract, he’s always more bad news

A-Rod is a player that has too much baggage, but the Yankees can’t easily get rid of him if he is guilty of using illegal substances once again. As some of the tweets mentioned, A-Rod is under contract and his contract is pretty ironclad to prevent him from losing everything if he decided on cheating again. The Yankees may be stuck with A-Rod’s contract for the next four years, but Major League Baseball can decide if A-Rod’s contract should be null and void. A-Rod’s fate is no longer in the hands of the Yankees, but in the hands of Major League Baseball, meaning that his future and possibly his career is on the line.

Major League Baseball will release more information in the coming days, elaborating on which players will be suspended and which players are off the hook. Looking from the business standpoint and the fan standpoint, both teams are feeling the exact same way when they look at A-Rod; disappointment. They can only hope that A-Rod doesn’t fall into a deeper hole.