According to George King of the NY Post, the Phillies are interested in the Yankees’ utilityman Ramiro Pena. Chase Utley has suffered injuries with both knees and the Phillies are looking for infield help. Pena really doesn’t have a whole lot of value as a trade chip – so if he does get traded, don’t expect much in the way of return.

The Yankees have also made some roster moves, via Anthony McCarron of the NY Daily News. Pena has been optioned to Triple-A, and Manny Delcarmen, Colin Curtis, Jose Gil, Kevin Whelan, and Cole Garner have all been reassigned to minor league camp. The Yankees active roster now sits at 31, so we’ll be seeing more roster moves in the coming days.

Phil Hughes did what he had to do. He went 5 innings, he made it to his pitch count, his velocity was good and he had command of his pitches in a Yankees 5-2 victory over the Rays.

Hughes’s only mistake was a hanging breaking ball for Matt Joyce which resulted in a 2 run homer. Other than that, Hughes was sharp and has proven that he is a contender for one of the spots in the rotation. Clay Rapada went an inning without giving up a run on 2 K’s, Cesar Cabral (1-0) had an impressive afternoon with 2 innings and 6 K’s & Mike O’Connor had 1 strikeout in one inning pitched without giving up a run.

THE GOOD: Justin Maxwell continues to hit the ball hard, going 1 for 2 with an RBI, Mark Teixeira was on base 2 out of 3 times & Robinson Cano was 1 for 3, Alex Rodriguez was 1 for 2 with a walk & Cole Garner was 1 for 3 with 2 runs scored.

THE BAD: There wasn’t really anything bad about today. Yankees just had a bit of trouble scoring late.

WHAT’S NEXT: Brett Gardner & Curtis Granderson are slated to make the trip to Ft. Meyers to face the Boston Red Sox in a Spring Training rematch. The game will be on ESPN & also on YES Network (choose YES Network if you can). David Phelps will get the start while CC Sabathia pitches in a minor league game.

Fresh from their predictable win against the University of South Florida, the starting outfield, Raul Ibanez & Russell Martin made the trip to Clearwater where they were going to get a taste of Major League action from Cole Hamels & the Philadelphia Phillies.

After Raul Ibanez’s bloop double that scored Curtis Granderson in the top of the 1st, Hunter Pence of the Phillies quickly made the score 2-1 with a towering HR to right field (thanks to the wind). 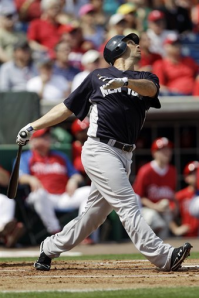 Raul Ibanez looks up at his bloop RBI single as Yanks win 8-5 vs. Phillies

Granderson answered back in the third inning with an opposite field HR to left off of Dave Bush which gave the Yankees a 3-2 lead. After scoring 1 run in the 6th, 3 in the 7th (a 2 run shot by Cole Garner) & 2 in the 9th, the Yankees looked set and stone to secure the win, but the Phillies attempted to bounce back in the ninth all starting with a Juan Pierre single. Although he gave up 3 runs in the inning, Michael O’Connor was able to regroup and got Cesar Hernandez swinging for the final out of the ball game.

One thing that made the Yankees look a little sloppy on the field today was errors. Eduardo Nunez had an E-6, Ivan Nova had an E-1 & Jayson Nix had an E-3, all in the first inning.

WHAT’S NEXT: The starting infield and Andruw Jones will take on the Phillies tomorrow as the Phillies make the trip to George M. Steinbrenner Field. Freddy Garcia is slated to start tomorrow.

Raul Ibanez looks up at his bloop RBI single as Yanks win 8-5 vs. Phillies

Today, the Yankees signed three players to minor league contracts: OF Cole Garner, RHP and former top prospect Adam Miller, and OF Dewayne Wise (pictured above – a.k.a. the savior of Mark Buehrle’s perfect game). Ken Rosenthal reported today that the Yankees are very unlikely to sign Hiroyuki Nakajima before Friday’s 5pm deadline. Not signing Nakajima will only increase the likelihood of a Eric Chavez-Yankees reunion.

Anyway, there’s college football on at 8:30 EST on ESPN (West Virgina vs. Clemson), along with some college men’s basketball (Duke vs. Temple) on ESPN2 at 7. Additionally, the Knicks, Devils, and Nets are all playing. Have a good night – here’s the open thread.