Makeshift Bullpen Getting It Done

If you were to tell me at the beginning of the season that Clay Rapada, Boone Logan, Cody Eppley and Corey Wade would be pitching important innings this year I would have told you to get your head examined. At the start of the year the Yankees had a bullpen that projected to be elite. They have lived up to that billing, but it has not been because of the guys you expected. With Mariano Rivera and David Robertson going down those 4 pitchers and Rafael Soriano have all stepped up in a huge way.

The fact that Soriano has saved 11 out of 12 games this year comes as no surprise. He was an elite closer in Tampa Bay and will continue to be here. I was in the minority at the time of his signing because I liked the move. The Yankees had a shaky rotation at the time so why not make the games pretty much over with a lead after 7 innings? He also gave the Yankees insurance in case the unthinkable happened, which it finally did this year. Soriano deserves huge credit for taking over for Mariano Rivera almost flawlessly so far. It was an outrage that he got booed after blowing the save on Sunday against the Mets. However, since I expected this from Soriano he isn’t the real story here; Clay Rapada, Boone Logan, Cody Eppley, and Cory Wade are.

Joe Girardi has always gotten the most out of his bullpens during his tenure as Yankees manager. He always makes sure they are well rested and he has done a phenomenal of mixing and matching since David Robertson got hurt. This was particularly evident against Atlanta. All three games were close and the late innings were all high leverage innings. Rapda, Eppley, Wade, and Logan all got opportunities to get holds and have converted.  Rapada has been a great LOOGY this year, as he has held lefties to a line of .163/.280/.256/.536. Eppley has relied on his fantastic sinker to get the job done this year. He has thrown his sinking fastball 78% of the time this year to induce an incredible ground ball rate of 70.5%. If you keep the ball on the ground that much you will be successful. 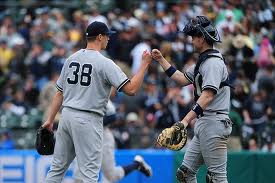 Boone Logan was a guy I always thought had the potential to be this good and more than just an average LOOGY. Logan’s line vs. lefties (.195/.255/.293/.548) is outstanding along with his 13.09 K/9 and 2.45 ERA. I always liked his hard fastball and slider combination, but he has completely changed the way he was pitched this year.Logan has only thrown his fastball 47.7 % of the time as opposed to 62 % last year, and 67 % the year before. Hence, he has thrown his slider 49.9 % of the time this year as opposed to 35.9 % last year, and 26.1 % of the time the year before.Logan’s slider has an incredible Whiff % of 26.49%. Cory Wade has been a great jack of all trades guy because he has the ability to throw 5 different pitches at any time. He is best known for his slow curve that has kept hitters off balance. He has let up big homers to Mark Trumbo and Miguel Cabrera of late but has been solid for the most part this year. Wade is 0-1 on the year, with a 2.63 ERA, a .95 WHIP, and 9.9 K/9.

These 4 Yankees have been the unsung heroes of the season.  Now with David Robertson back they will face less pressure and should continue to thrive. Also, they can stay fresher because with the Yankees having all of these late leads lately they have been getting a ton of work. Robertson makes this bullpen perhaps the best in the MLB even without the great Mariano Rivera. The starters also deserve credit for carrying their weight without Robertson available. If the Yankees go on to have a great season people need to remember this time when Robertson got hurt and these 4 pitchers held the fort down.

This was the series that was the most talked about all Spring Training. It wasn’t the fact that the Yankees were going to face the new Miami Marlins in an exhibition game. It was the fact that the exhibition game took place at the brand new Marlins Park in Miami which included state of the art scoreboards, a retractable roof, a fish tank (with bulletproof glass) behind home plate, a night club and a swimming pool where fans could leisurely watch and enjoy the game. Still, there was baseball to be played, which the Yankees did in the beginning of the 2 game set vs. the Marlins.

CC Sabathia went 4 innings giving up 3 runs on 4 base hits, Mariano Rivera broke his 28 inning scoreless streak (which dated back to 2008) by giving up 1 run on 2 hits, Rafael Soriano gave up 1 run on 3 hits, Cory Wade gave up 3 runs on 2 hits, George Kontos had a scoreless inning and a third while giving up 1 hit and Juan Cedeno faced 2 batters in the 9th inning without giving up a run and securing the save.

THE GOOD: Aside from the Marlins Ballpark (which is gorgeous, but not as historic as Yankee Stadium) the Yankees came to play in Miami. Derek Jeter and Nick Swisher each had 2 hits apiece while Curtis Granderson, Alex Rodriguez, Robinson Cano, Raul Ibanez, Russell Martin & Brett Gardner all had 1 hit apiece. Nick Swisher returned to the lineup after battling a sore groin and came back in style, hitting a HR in the 6th inning which extended the Yankees lead.

THE BAD: Mark Teixeira was 0 for 3 today and the Yankees pitchers (aside from George Kontos & Juan Cedeno) didn’t look sharp today. Maybe it was the fact that they were in a new ballpark. I’ll give Mariano Rivera the benefit of the doubt since this was the first time in a long time that he has traveled with the team during Spring Training.

WHAT’S NEXT: The Yankees stay in Miami for one more game and play against the Miami Marlins. The game (I’m sure of it this time) is at 7:05pm on MLB Network.

What the David Robertson Injury Could Have Meant 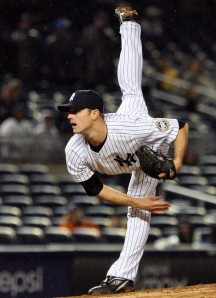 Last Thursday the Yankees received quite a scare when David Robertson hurt his foot. Robertson hurt his foot falling down the stairs carrying an empty box, which can only be described as a way you would think a Mets player would get hurt.  Girardi said he was concerned and that Robertson would be getting more tests. Girardi normally does not use this type of language if there is not a bad injury so I was pretty confident it was serious. Why foreshadow bad news if there was none coming? Fortunately, Roberston only has a bone bruise in his foot, has shed his walking, played catch without pain, and expects to be back by opening day. What would have happened if Robertson did have to miss significant time though?

What the Robertson scare made me realize that the bullpen is always one injury away from trouble. The Yankees have one of if not the best bullpens in baseball but if Mariano Rivera, Robertson, or Rafael Soriano get hurt you are one man less deep and it hurts. The bullpen is so good because of the quality and depth of the pitchers. I and many Yankee fans have been so spoiled by Rivera always being there to close it out in the 9th. It is not just how amazingly well he gets the job done, but that he is always available to get the job done. He is rarely hurt. If Robertson was out for awhile it would not be the end of the world, but it definitely would have hurt. I believe Soriano would be fine in the 8th inning, the issue would be you loose depth in the bullpen and what happens when Rivera or Soriano need a day off. You would have guys like Corey Wade and Boone Logan taking on much more featured roles. It would not have crippled the team like loosing a key everyday player would though.

The main goal of spring training in my mind is to get out completely healthy. Sure it is great to see guys producing but it is not that important. There is an old saying that you do not want to waste all your hits in spring training. The Yankees currently are not hitting very well but I will gladly take that over a key injury any day.  As long as the players are in shape and ready to go by opening day than spring training has been a success. Robertson is a big part of the Yankees and thankfully he should be able to continue to be a big part of this team going forward.

Garcia pitches well, then leaves due to injury in Yankees 7-5 loss to Blue Jays

Freddy Garcia made his case as to why he should be in the starting rotation during a Yankees 7-5 loss to the Toronto Blue Jays. Garcia pitched 3 innings of 1 run ball until he was forced to come out of the game in the 4th after he misplayed the baseball and it hit him in the right hand. Garcia had his fingers stretched out and refused to move his hand as Girardi took him out of the game.

Cory Wade gave up a solo HR to J.P Arencibia while Manny Banuelos was lit up, giving up a 3 run HR to Edwin Encarnacion. Encarnacion also hit a solo shot against Garcia in the second inning. Garcia was taken back to Tampa where he will have precautionary x-rays.

WHAT’S NEXT: Brett Gardner, Russell Martin & Andruw Jones will make the trip to play the Washington Nationals tomorrow. Fans who are interested in watching Nationals prospect Bryce Harper (along with the Yankees of course), the game is on MLB Network tomorrow at 1:05pm. Michael Pineda is slated to pitch for the Yanks.