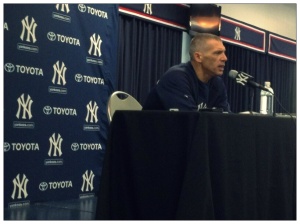 Photo taken by Mark Feinsand of the Daily News

Today may be the State Of the Union Address for the United States of America, but today was the State of the Yankees Address live from the minor league complex by none other than the Yankees manager Joe Girardi (who might I add is in the final year of his contract). Girardi covered a plethora of topics but one of the biggest topics that Girardi covered was Alex Rodriguez. Here’s some notes and news from today.

“There really isn’t a lot to talk about. My concern is for him to get healthy. This club is used to having what people might call distractions.”

Girardi also believes that the Yankees are going to win 95 games and the World Series. “There’s a lot of talent in this room. If we play up to our capabilities, I believe we’re a very good team.”

As of today, Brett Gardner will be in LF, Curtis Granderson will be in CF and Ichiro Suzuki will be in RF. There’s no plans on moving Gardner and Granderson as of yet, but it could change as he discusses it with his coaches.

Girardi on concerns of Derek Jeter and Mariano Rivera:

He doesn’t have any concerns on both Yankees who are coming off of injuries.

— Austin Romine came into camp thirteen pounds lighter and his back in very good shape. He believes he sees an opportunity.

— CC Sabathia is also 100% after having elbow surgery over the winter. He says that the surgery was a relief and he now has complete mobility of his elbow. Sabathia also lost a lot of weight, now weighing in at 290. His first bullpen session will be on Thursday.

— We also have new locker arraignments and numbers in Yankees camp. Here they are: